Calm After the Flood 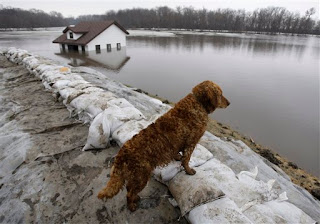 As my head cleared I learned we were victims of a flood. Dar had gotten up to... well, to do what we "fifty-ish and older" people do at 6am... to pee. It's still plenty dark here in West Texas at 6am, so to minimize the eye-pain from bright lights she decided to get the job done by the light of the silvery moon. Same old routine, you know... lid goes up... drawers go down... and sit... but in this case, on a full and over-flowing bowl of (thank God) fresh water... well, at least as fresh as water that's made it that far can be. And it's not just in the bowl, no sir. It's down the sides, on the floor, out the... err... powder room door, into the kitchen area... and, we learned later... down into one of the storage bays below. What the heck happened? Is this what they call a sitz bath? 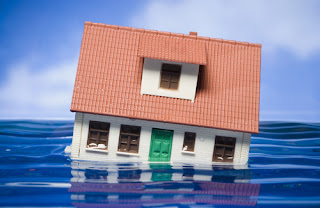 Truth be known... we had a smaller version of this happen about a year and a half ago. Here's the scoop. The water control valve on the toilet lets water into the toilet bowl on command... like when it's time to flush. With it's job completed, it's supposed to shut off. However, now twice, something happens that prevents that valve from closing completely, and a slow trickle of water continues to flow into the bowl. At least with our RV toilet (Thetford Aqua Magic Style Plus) there apparently is no overflow that would carry excess water into the black-water tank... don't know if this is normal or not. At any rate, when the toilet overflows, it just overflows and the water goes down-hill from there.

The last time this happened, I removed the suspect valve, inspected it, back-flushed it, and, since I couldn't find a ready replacement, reinstalled it. And it's worked perfectly since... at least until this morning. And, since the incident this morning the valve, as you'd expect, has worked as it should all day today. Hmmm. My trust is waning.

Once we get to Rockport I was planning to rebuild the toilet anyway, so you know a new valve will be part of that job.  When you think about it, a functioning toilet is one of the few really mission-critical pieces of equipment on board the bus-house. And after almost 4 years of full-time service, I thought it prudent to replace seals and lube things up... so it's ready for the next four years. It's good to have a working toilet... you know? In the interim, we're living off our onboard fresh water tank and shutting the pump off at night, so we can sleep worry-free.

I don't want to leave anyone with the impression that this was a major flood. In the big scheme of things, it was really pretty minor... able to be sopped up with a few bath towels. But the potential of a larger "event" will keep us on our toes for a while.

Other than that, it was a slow day here in Alpine, TX. Dar went downtown, ran a few errands, and got a haircut. I finished my long-procrastinated project of getting my expense tracker spreadsheet updated. After that, I sat outside, and read the rest of the afternoon.

You may have already thought of it, but if you haven't been there you might want to check out Big Bend National Park while you're in that area. Incredibly remote territory down there. Not too far south of Alpine.

Have a wonderful Christmas and a dry toilet in the New Year!

I had that same problem with my toilet. I now carry a spare valve and an extra floor gasket too.

These things seem to break at the most inopportune times.