The last time we were in the Big Bend area we didn't visit Terlingua or take the Road to Presidio. Well, that was remedied on the Thursday before Christmas... during our stay at Lost Alaskan in Alpine Texas. Terlingua, on the west side of Big Bend National Park, is a pretty good poke -- about 80 miles -- from Alpine, so we made an effort to get an early start. The first part of the drive was more twisty and hilly than I thought it'd be, testament to the mountainous region that Alpine is in. From our 4500 foot elevation at Alpine it's a mostly downhill run to the 2700 foot elevation of Terlingua. And due to this lower elevation, it's usually considerably warmer than Alpine too.

Our first stop was the famous Kathy's Kosmic Kowgirl Kafe'. This famous local eatery is really a collection of trailers sheds and other structures that house the facilities. Most of the food fixin' is done indoors... most of the eatin' is done outside, at tables under a roofed area or at chairs and benches around a smoldering campfire -- which is where we sat with our breakfast burritos and coffee. We just found a couple chairs among a group of locals and joined in the conversation which was wide-ranging and went nowhere really.  But that was the charm of the place. Relaxed, laid-back, we heard stories of one guys trip to Alaska; another's trip across country -- both of these on motorcycles. We talked about bees, highway speed limits, the quirky nature of the Terlingua area, how some people come to visit and never leave, how there aren't many rules or laws or people to enforce them anyway, how the Mexican Border violence is blown way out of proportion and is hurting business all along the border as tourists stay away, fearful they'll get caught up in it all. We stopped for a quick breakfast and ended up whiling away much of the morning at Kathy's. 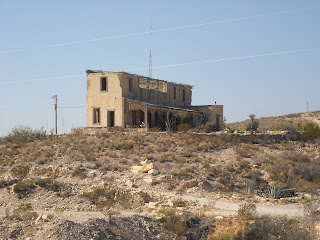 Just a few miles down the road from Kathy's is the historic Terlingua Ghost Town. While it certainly is historic -- having been a 2000 person mining town in the early 20th century, there are more people here today than ghosts, I'd suspect. Looking like a place that didn't quite survive a war, there's actually a few going businesses hidden in the ruins. As we did the official walking tour, we ran into the owner of the Menagerie Press... a letterpress business. The woman who owns the place takes pride in the old printing presses she's scavenged from around the country... as well as her ancient International truck that's her daily driver. We had a nice time getting to know her. 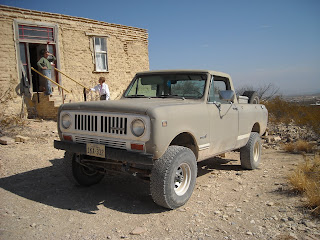 Next up was the Road to Presidio. It's only about 60 miles from start to finish, but expect it to take much of the afternoon if you'd really like the full experience. It's a winding, twisting road, with some steep grades (15% or more?) and tight curves that generally follows the Rio Grande River. Officially known as Farm Road-170, it's a road to be experienced, not traversed; a destination, not a "via" or "by way of..."; a place you go to, not through. We stopped many times... for photos, for a picnic, to look, to absorb, to appreciate. One of the guys we had breakfast with said it's the best road in the USA. I don't know about that, but it certainly is right up there on our list.


From Presidio we returned to Alpine via US-67 through Marfa. And since the timing was right, we hung around Marfa to see the famous and mysterious Marfa Lights.  The what???


From Wikipedia:  The Marfa lights or the Marfa ghost lights are allegedly paranormal lights (known as "ghost lights") usually seen near U.S. Route 67 on Mitchell Flat east of Marfa, Texas, in the United States.

If you know me at all, you know I'm skeptical of claims like this. I mean, com'on, mysterious lights that no one has been able to explain for a hundred years? My mind naturally generates theories like... oh... that the members of the Marfa Chamber of Commerce take turns getting out into the hills around town with lanterns and big flashlights. Other theories talked about locally have to do with gasses escaping old mine shafts, or reflections of moving aircraft, or old Native spirits -- ghosts -- that haunt the hills, unable to rest for some unexplained reason.

In the hour after sunset, from the very nice Marfa Lights Observation Deck (modern and complete with paved parking, restrooms, and telescopes for your viewing convenience) about 8 miles east of Marfa, we stood, shivering, with a dozen others waiting for the show. The warmth from earlier in the day faded with the sun... that's the way it is in high country during the winter... warm days and cold nights.

A few observers who had been here before started pointing out a spot of light. It didn't appear to be moving; nor was it in the general direction we were directed to look for the mystery lights. Eventually, we wrote that one off as a cabin or ranch house. Then, one... two... eventually more moving lights appeared in the hills to the southwest. This was it!?? Were these the Marfa mystery lights?? Hmmm.

Now, please understand... I have no claim on truth or what's actually going on here. But my opinion is that we were just watching the headlights of cars up on US-67... the very same road we took just an hour or two before on our way from Presidio to Marfa. The lights were following a pattern, and with my binoculars, I thought I could even see the cars themselves as they wound their way around hills and curves on their way into Marfa.

We have seen the mystery lights... and, just maybe, they were us!