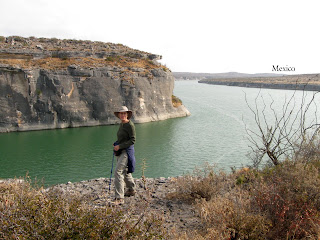 Well, we did it. We turned a 6 mile hike into an 8+ mile hike, and our lazy bones (and muscles, joints, etc.) weren't as in-shape as we were hoping. As a result, we were both dragging by the time we got back to the bus-house this afternoon... but, we were in good spirits and glad we completed the Rio Grande Trail here at Seminole Canyon State Park.

After shedding some gear, popping a couple ibuprofen, and pouring a large beaker of electrolyte replacement therapy (beer), we sat outside, cool as it was, and tried to soak up some of the last heat rays from the sun. It was a great feeling.

Today's trail took us from the campground out to the point where Seminole Canyon meets the Rio Grande River... which, because of a dam, actually has real water in it at this point and is called Lake Amistad. Near that junction is the real attraction for making the hike... an open rock shelter/cave called Panther Cave, on the other side of the canyon. The Cave is only accessible by boat but is very visible from our side of the canyon. With binoculars you can see many pictographs, including a large panther, which were painted by native peoples 1500 or more years ago.


But the pictographs are only the icing on the cake. The entire hike was a walk into history. Some of the trail follows the original Southern Pacific Transcontinental Railroad alignment and in many places cuts, fills, and grades remain. I could imagine steam engines passing this very point more than a hundred years ago... spewing steam and smoke while feeding the transportation needs of a headstrong growing nation. While this particular section of the original railroad grade was abandoned long ago for a more favorable nearby route, much of the original is still in use across the southern edge of the U.S. 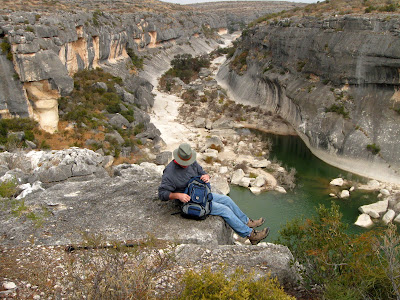 A number of times today we stopped to rest... to sit on the edge of the canyon and dangle our feet over the side... to munch on energy-snacks and rehydrate with water... and just to enjoy the sounds. We watched as a Golden Eagle swooped up and down the canyon -- checking us out and giving us a little show. There was another black bird we can't identify, that made a sound we'd never heard before... reminiscent of a crow... but it wasn't a crow... flew down the canyon creating a racket that only it knew the reason for. And the ever-present sound of the waves lapping on rocks and shoreline provided a peaceful white-noise that enhanced the whole experience. There wasn't another human to be seen. We were alone with nature. It was one of those special times we'll always remember. 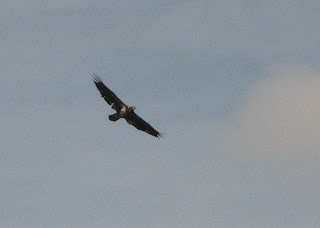 As my leg muscles rest tonight, my fingers are getting their chance to help me describe our day. Eventually, the whole body has to rest... and that time is close. Tomorrow, we're rolling down US-90 again, eastbound again, and hope to end up somewhere around Hondo, TX. for a few days. It should be an easy day.