Sand. White sand... as far as the eye can see. Huge, moving piles of the stuff... so white one would be forgiven for thinking it was the aftermath of a blizzard in Wisconsin. They plow it, just like snow. It drifts in the wind, just like snow. Kids and adults alike sled down steep hills of the stuff... just like snow. It's cool to the touch, even on the hottest days in summer. It's the largest gypsum dune field in the world at 275 square miles... the next largest is a mere 8 square miles. It's the White Sands National Monument.

Saturday we made the 50 mile trek northeast out of Las Cruces, through a gap, the St. Augustin Pass, between the San Andreas Mountains and the Organ Mountains in south central New Mexico. On the other side of the pass and almost 2000 feet below, is a broad flat valley called the Tularosa Basin -- 150 miles long and up to 60 miles wide. A large portion of the valley is used by the White Sands Missile Range, the largest military installation in the U.S. It's also the location of Trinity Site (hint: what happened on July 16, 1945?)

Because this large valley is a "basin", water that enters cannot escape. Any precipitation that falls on the basin or in the surrounding mountains flows to low-points where it pools until it mostly evaporates into the dry desert air. As it does so it leaves behind the dissolved solids -- the salts and, in this case, a lot of gypsum it absorbed while flowing down the surrounding mountains. The gypsum left behind when the water evaporates is in the form of selenite crystals, which are subsequently broken down by erosion into fine grains of gypsum sand. Persistent winds from the southwest pick up and carry this fine sand and it naturally accumulates in large sand dunes. 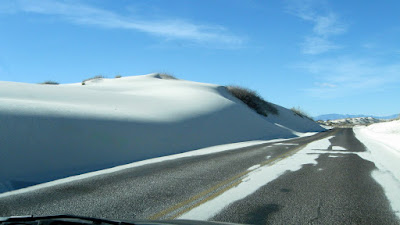 These sand dunes are "alive" too... in the sense that they're moving. Driven by prevailing winds, they can move as much as 30 feet per year. Plants and animals are also alive here... and have evolved interesting adaptations to enhance their chances for longer life. Some lizards and insects have developed white-ish colorations as camouflage. The soaptree yucca elongates it's stem to keep it's leaves above the sand of a building dune, growing as much as a foot per year. Chances are, when you see a yucca growing atop a 30 foot dune, it's really a 32 foot plant with it's roots in the desert floor beneath the dune. Often the dune will move and inundate a desert cottonwood tree, which has evolved to continue growing just fine, thank you, even when only the top-most branches of the tree are poking out the top of the dune.

There's also a plant called a skunkbush sumac that's able to establish itself and grow in dunes. It's a fast growing bush with a very deep and extensive root system. Interestingly, as the dune moves on... eventually completely away from the bush, these roots are able to hold onto the sand containing it's root system. The resulting "pedestal" or "plant stand" looks like a tall column of sand with a big bush growing on top. Check our online photo album for some good examples. 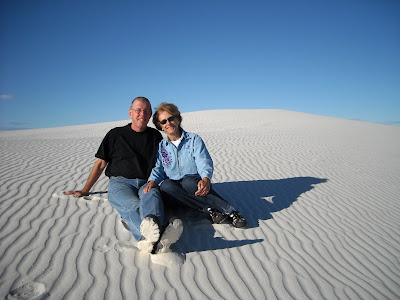 We lingered out in the dunes for most of the afternoon. About an hour before sunset, we joined a ranger-guided sunset nature hike to learn more about what we experienced. And then, as the crowd drifted away, we stood, alone, atop a dune, at sunset -- watching the light and colors illuminate the surrounding mountains, the sky and clouds, and the dunes themselves -- in a magnificent light show that we'll warmly remember for many years to come.

Still shaking white sand out of my Keens...
T

I've read that there are many glass crystals formed from the sand that was exposed to the extreme heat of the bomb. I understand the site is not open for tours except a special tour once a year. Have to try to get in on that.

Paul, Trinity Site is on my "bucket list" too. The info I found was that the site is open twice each year... on the first Saturday in both April and October.