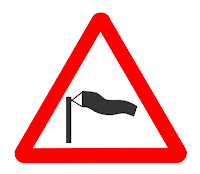 Having thoroughly enjoyed our brief survey of Bisbee, we took advantage of the favorable weather to make our run into and across New Mexico. As most regular travelers through this area can relate, winter weather in New Mexico can be brutal at times... not so much precipitation, but high winds, and colder temps than unsuspecting travelers would anticipate. When through here in February of 2008 [link to journal entry] we had to deal with 50mph winds.

The 240 mile drive yesterday seemed easy. The miles melted away. We had a brisk tailwind for most of the journey, a luxury that doesn't happen often enough. Car drivers don't concern themselves with winds as the aerodynamic shapes of modern cars almost make winds a non-factor. But big old RV's have to punch a big 12 by 8-1/2 foot hole through the air when running down the road... that's a hundred square feet... and the laws of physics say that won't happen without horsepower and, of course, fuel. Comparing a 20 mph headwind to the same 20 mph tailwind, the speed of the air rushing over the vehicle when traveling at 60mph is an easy 40mph with the tailwind, but a whopping 80mph with the headwind. When the airspeed doubles, the energy needed quadruples. That's why fuel consumption suffers with headwinds.

But besides all that physics and fuel efficiency stuff, passenger (and driver) comfort in the bus-house is greatly effected by the wind as well. In the tailwind example above, which was close to what we experienced yesterday, we're moving along at 60mph but it only feels and sounds like 40mph. The atmosphere inside the bus-house is quiet and relaxed.... we can converse at normal volumes without strain. Traveling through the countryside becomes a real pleasure.

About half our drive yesterday was on AZ-80, a small two lane state highway with very little traffic. Roads like this have become our favorites. The other half was on the super-slab... I-10... where heavy truck traffic moving along at 70 or 80mph causes an increase in tension due to friction with our 65mph style. Besides the heavy traffic, we've found the smoothness of less traveled smaller roads to often be much better than the beat-up choppy Interstates. But with that said, I-10 through this part of New Mexico was in reasonably good shape.

Something else we noticed while east-bound on I-10 was the large number of people apparently moving themselves and their worldly possessions in that same direction. Cars packed with people and stuff, pickup trucks loaded and tarped, rented cargo trailers and trucks, and two or three vehicles packed up and traveling as a group... and many of them had California plates. It was literally a steady stream of them -- more than anything like it we've noticed before. We thought for a while that it was people traveling for the Holidays... but most were loaded with far more stuff than would be needed for a week long trip to visit Grandma. We can only speculate as to the reason for this phenomenon.

We pulled into a small RV Park in Las Cruces a little before 4pm. Our main motivation for spending a couple days here is our plan to visit the White Sands National Monument today, Saturday. We're leaving in a few minutes, so I better wrap this up.