From Tucson to Bisbee

December 16, 2010
Let's see... where was I? My last Journal entry was yesterday morning, Wednesday, just before we headed out to visit the Saguaro National Park. This National Park actually has two units -- one on the east side of Tucson and the other on the west side. Years ago, during a business thing, Dar and I visited the west-side unit. As a result, this time there was no choice in the matter... this time we were going to visit the east-side unit. 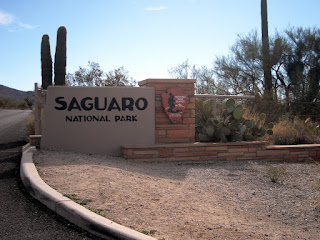 Only a short 15 minute drive from "the resort", we found the Park's visitor center and went inside to get the overview. Visitor centers at National Parks are usually well done, with plenty of opportunities to increase your knowledge, which means you'll increase your chances for a fulfilling and educational visit. The eastern unit, also known as the Rincon Mountain Unit, offers a lot of hiking and biking trails and an 8 mile long driving tour called the Cactus Forest Drive. 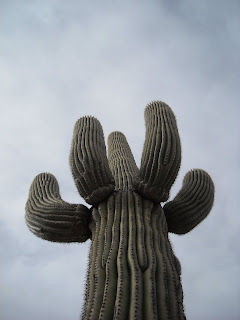 Of course, the focus of the park is the stately and grand Saguaro Cactus. These slow growing giants exist only in the Sonoran Desert, primarily in portions of Arizona, Northern Mexico, and a very small area of California. They grow very slowly, may live to 200 years, and stand as tall as 50 feet. A Saguaro doesn't get it's first arm until it may be 60 or 80 years old. The individuals we saw with more than a dozen arms are certainly well over 100 years of age, perhaps closer to 200 years. They've adapted to thrive in the dry desert environment, but they do require water, at least once in a while, to survive. Their exterior waxy skin is corrugated, and expands and contracts depending on the amount of moisture it's storing.

During our short visit we drove the Cactus Forest Drive and stopped at almost every pull-off and overlook to soak in the place... to marvel at the variety of life in the desert. In some ways it reminds me of some people I know... seemingly simple and uncomplicated, but really more complex, diverse, and so much more than what you expect.

With time flying by quickly, we left "the resort" this morning and continued on our search for adventure in extreme southern Arizona, while still trying to make some eastward progress. The trip today was through Sonoita, Tombstone (maybe the subject of a future entry), and into the old mining community of Bisbee. We found an RV park within walking distance of the Old Bisbee section of town, and spent the afternoon exploring on foot. Old Bisbee's narrow streets and 100+ year old buildings and houses are located a mile high (5300 feet about) in the canyons, crooks, and notches between the peaks of the Mule Mountains in southeastern Arizona. 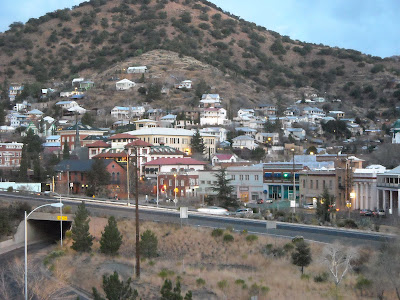 Bisbee was founded in the late 1800's and really thrived during the early 1900's. The mines produced copper, gold, and list of other minerals valuable to a growing industrial nation. At it's peak, Bisbee had about 14,000 residents, but by 1950 the boom times were over and the population was down to less than 6,000. Limited mining continued for a few more years but the biggest mines were all closed by the 1970's.

The history of the town may be mining but today it exudes an artsy-fartsy, quirky feel. It's clear to the casual observer that many residents and visitors are affluent... probably in search of something out-of-the-ordinary to spice up their lives. There's also the "flip-side"... the not-affluent artists, wannabe artists, wanderers, and hangers-on that are also attracted to art-based communities like this. We ran into one that was gingerly balancing on the fence of coherence while trying to talk with us... and I don't think she was the only one. 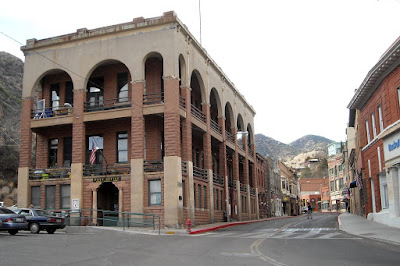 We strolled up and down the narrow streets, shot hundreds of photos (some of which will be showing up soon in an online photo album near you!), wandered into this place and that place, talked and had a beer or two while discussing the history of the area with longtime residents and interested visitors alike. A thoroughly enjoyable day. 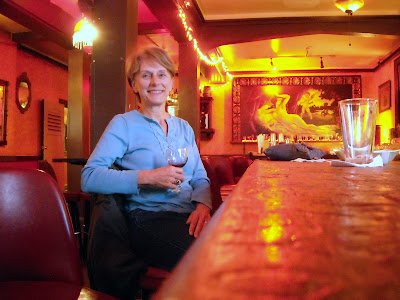 Tomorrow, Friday, assuming the weather cooperates, we're planning to make another move... this one a longer drive deep into the State of New Mexico. We're thinking we'll make camp somewhere around Las Cruces.

Thanks for checking in on us...
T

ps: Bisbee is a very photogenic town. Check out our many more photos in our Bisbee Online Photo Album.
Arizona