A Celebration and A Rememberance

on May 30, 2011
As usual, time's evaporating, and I'm getting further behind with updates to the blog with every passing day. It's a consistent problem for me when we sit in one place for an extended period and I'm preoccupied with other things. Since the last post is now over a week old, let's bring the record up to date.

Our weekend trip northward for the wedding morphed into a busy week once back to Beaver Dam late Sunday the 22nd. This weeks project was working with Dar's brothers, Dennis and Steve, to remodel the main first floor bathroom in the house here at The Farm. The centerpiece of the project was the replacement of the old tub/shower module with a new walk-in shower -- which involved cutting up the old (wouldn't fit through doors) and installing a cool new three piece unit that assembled like lego blocks. And since things were all torn apart it was decided to retire the old vanity/sink, replacing it with a younger, more attractive unit (the quest for youth and beauty also applies to bathroom fixtures as well as people, doesn't it?).

The brothers, both trained carpenters and skilled in the building arts, did most of the work while I was happily relegated to holding this, running for that, and lugging the other thing. Despite my involvement it's turning out pretty good too. About 90% done, it's fully functional and everyone seems happy with the outcome. As we age it becomes increasingly difficult to step-over a tub to enter the shower... and this change makes it a snap... just negotiate a low step-over lip and you're in. Dar's Mom and Dad, in particular, will enjoy the change. 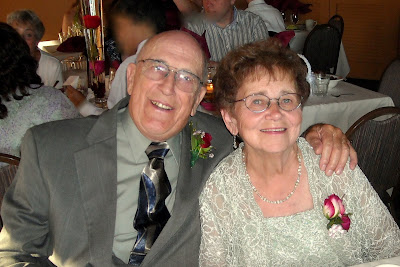 And speaking of Dar's Mom & Dad, Cal & Marion celebrated their 60th anniversary this week. Congratulations you two. That's quite a milestone... one to be proud of. This past Saturday a small gathering of family and friends came together to help them mark the event... a quasi-family reunion that was a lot of fun. Some hadn't seen others for many years and one thing in particular became very clear -- we're all aging faster than we'd sometimes like to admit.

I also saw a few medical-types this week. The dermatologist is watching a few areas on my exterior but isn't concerned enough yet to cut or biopsy anything. "No cavities" was the word from the dentist... however I think I'm going to go ahead and get a flexible, removable crown to replace the tooth (#19... lower left molar yanked out last year on account of a "resorption" problem -- whatever that is). Chewing with a crater on my left side isn't real productive... so we'll give the crown thing a try. And finally, my regular doc finally tricked me into agreeing to the dreaded "C"-word thing... a colonoscopy... which I've been successful in evading for the past 10 years. I'm not a strong person when it comes to medical procedures and have a whole library of involuntary reactions I can pull off the shelf when confronted by anyone medical wielding sharp objects or probes of any kind. The best thing I can say about this deal is that I've been promised that I'll be completely knocked out and it'll be over before I know it. Hmmm... bet they say that to all who climb the gallows (an inadvertently appropriate analogy since both procedures involve a trap door.) OK, enough of that.

We're experiencing a shockingly warm summer-like day here in Southern Wisconsin today... highs in the mid to upper 80's. Feels good after all the coolness of the past couple months.

Remembering our Veterans on this Memorial Day...
T
Life in 300 Square Feet Wisconsin