The first week of July has been good for us. And the weather has been marvelous.

First the 2011 Corn Report:  Last year, 2010, was an unusually good growing year around south central Wisconsin. You may or may not remember that I took a photo of myself with the corn in the field right next to the bus-house on the 4th of July... testing the old adage of "knee high by the 4th of July"... which was blown away by the reality of 7 foot high corn that had actually "tasseled" on that very day. It was an amazing thing.

This year started much slower. A cold and wet Spring slowed fieldwork and the planting process for most farmers, and was weeks behind last year's pace. But by July 4th, good moisture, some warm days, and those amazing corn hybrids farmers are planting these days produced robust corn plants that were almost 6 foot high. I did daily measurements for a few days leading up to the 4th... and found these things were growing between four and six inches per day.

Our Holiday weekend: The farm became a quasi-RV park over the 4th as family from Dar's side descended for a holiday party on Saturday. The weather was spectacular and, for the most part, that celebrated summer creature and siren of summer -- the Mosquito -- stayed in the wings until after dark. As usual, there was too much food (who am I to complain about that?) but reconnecting with folks we don't see but every year (or two or three) made it all an enjoyable day. 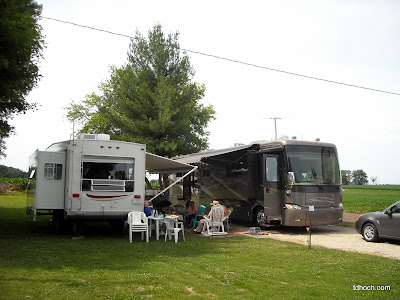 On Monday we joined family from my side at the nearby Columbus 4th of July parade. With only a handful of bands, most of the parade was a collection of antique cars, farm equipment, politicians, clubs, and businesses... all celebrating Independence Day and looking for a little recognition if not awareness among the throngs lining the street. Another warm sunny day, a few people over-heated or char-broiled in the bright sun, but the atmosphere was friendly, social, and fun.


Wednesday night we joined family for the Beaver Dam Concert in the Park Series... a weekly free concert at Swan Park every Wednesday during the summer. The performing group this week was "Loco Vocals", an energetic collection of 10 local musicians who played and sang a wonderful selection of songs from almost any genre you can imagine... pop, rock and roll, country, blues, folk, and more. (but sorry rap fans... no rap.) The four main singers really wow'd the crowd with their excellent harmonization. It don't get much better than this on a Wednesday night in Beaver Dam!

Wanderlust: As my thoughts drift to the future and our upcoming journey westward, I checked one of the webcams at Crater Lake the other day. This image, taken on July 1, shows there's still a bunch of snow up there... more than I was expecting to see. Our visit there in October of last year was also in heavy snow. Summer really is very short phenomenon at these elevations.