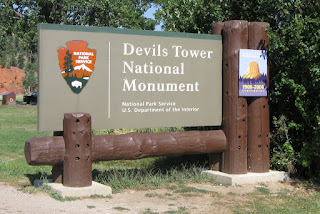 Saturday, Dar and I drove up to Devils Tower National Monument. Neither of us have ever stopped here before despite being so close during a number of jaunts through the west while living in the midwest, so it was something we considered a "must see".

The drive took us east about 30 miles to Moorcraft, then north another 30 miles on US-14 to Devils Tower Junction. The Monument's gate is a few miles further and then a short climb to the Visitor Center parking area. 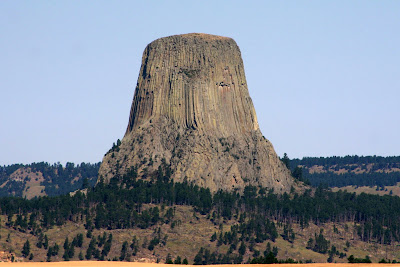 It is an impressive thing. Formed thousands of feet below ground level many millions of years ago when a mass of volcanic lava forced it's way upward and into surrounding sedimentary rocks. The betting is it never made it to the surface... just a relatively small intrusion that didn't have the force necessary to bubble to the surface and grow into a full fledged volcano. It's made up of a rock called phonolite... a mixture of volcanic basalt and feldspar. Phonolite is very hard, much like granite. During the process of cooling the material shrinks and vertical cracks develop, which eventually join other vertical cracks, leaving tall multi-sided columns that give the monolith it's distinctive "clawed" look.

And speaking of "clawed"... many Native Americans consider this place sacred. One of their legends involved the earth saving some young girls from a bear by uplifting this column of rock, with the young girls on top, high into the sky and well above the bears reach. The bear clawed the sides of the tower but was never able to reach the top. Indians commonly refer to the tower as the Bears Den, the Bear's Lair, or Bear's Lodge.

Over eons of time, the surrounding softer rock eroded away leaving the much harder phonolite monolith standing tall above the current surrounding ground level. Rising more than 1,200 feet from the surrounding terrain, it tops out at about 5,100 feet above sea level. The top is more rounded than flat and covers an area of about 1.5 acres.


No, we didn't get to the top. But others did. We saw dozens of people scaling all sides of the thing and a few people standing at the top. Dar and I are pretty much in agreement on this point: we are not interested in technical rock climbing at all. Many years ago I did "climb" Mt. Hood in Oregon, but it's a relatively easy feat -- not technical at all -- compared to scaling the shear sides of something like Devils Tower.

We stopped and chatted with a ranger in the Visitor Center before heading off on a hike around the Tower... a relatively easy 1.3 mile ashpalt paved path. The tower is surrounded by a boulder field... the "droppings" of millions of years of erosion as the tower sheds large chunks of itself. When I expressed concern about the stability of the rock on the tower and the danger to climbers, the ranger said the last large chunk that fell was 3 years ago... and the Forest Service brought it down intentionally when they deemed it a hazard. It's good to know somebody's looking out for those nutty climbers... and the hikers on the path below.