A Good Drive to the Badlands

We got an early start out of Cottonwood COE near Yankton on Wednesday morning. The day was bright and quiet... and what little wind we experienced during the day gave us a push to some degree. We decided to once again shun the Interstate Highway System and stick to mostly 2-lane US and State highways. Our route took us over the Fort Randall Dam... the next higher dam from Gavins Point on the Missouri. From there, we clawed through the heart of southern South Dakota, through farm country and Indian Reservations and, somewhere, oh, maybe somewhere west of Winner, South Dakota, crossed from the "Midwest" to the "West". I notice this every time we make the trip west... there's a point, OK, maybe an area... where you cross from the Midwest with it's farm fields of corn and soybeans, it's dairy cows, it's county fairs, it's smaller farms and fields... to the West with it's wheat fields and grazing land, horses, steers, it's rodeos, and it's wide open spaces. At the same time there's a noticeable change in the humidity... and the sky seems bigger. Hard to explain, but bigger. We crossed into the West today. 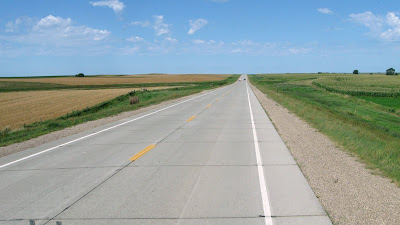 Our objective was to make it to the area of the Badlands National Park -- about 280 miles for the day. There's a basic campground of sorts in the park and, since we're only going to stay for maybe two nights, we'd thought we'd make that our primary target. . There were a couple alternates in the small town of Interior just to the south of the Badlands Visitors Center... so even if "plan A" didn't work out, there were options. 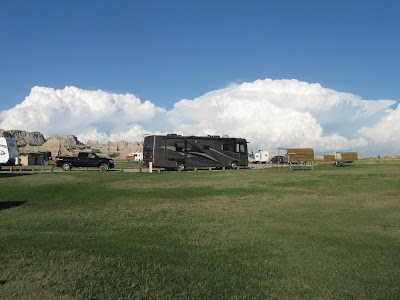 Well, we arrived about 3pm and drove through the Badlands NP campground with it's funny arrangement of one-way circular roads and "wide spots" that are the designated campsites. Some have power and some don't. We found one of the last sites with electric, pulled in, and found we could make it work fine for two nights. Even though it had power (50 amp to my surprise) it was a tad "pricey" at $28 per night. But we're parked in the National Park, with gorgeous vistas of colorful peaks and rock formations and stunning sunsets and awesome sunrises. The only thing, even slightly negative to write about, is the heat. In this higher and dryer climate, the sun can really get to work and heat things up when it's out. After we arrived the air temp rose to well into the '90's... which drives the interior of the bus-house even higher. Suddenly, I'm real glad we've got that 50amp pedistal right over there, and we've got both air conditioners running full blast just to keep us under three digits.

Then, as soon as the sun gets low in the sky... about a half-hour before sunset... the air starts to cool noticably and the A/C is switched off. Dry air, without the power of the sun, cools quickly. It might sound strange, but by shortly after sunset there's a coolness in the air that can send some people looking for more clothing. That's the West... especially, the high-country West. 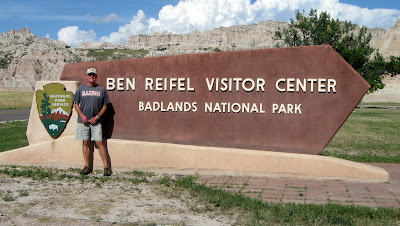 After setting up we headed over to the Visitors Center and picked up some history and information to make our exploration the following day productive. Then, as tired as we were after a long day of traveling, we opted to have dinner at the Cafe in the Lodge. We split a ceasar salad and a taco on flat bread. It was acceptable but certainly not high-class dining. Some people live to eat... most of the time we eat to live.