Since we were this close we felt we had to go. I mean, it's only held one time each year, on the second weekend in August, and this year, 2011, this is the weekend.

I may have heard something about it... on PBS or NPR... years ago.  But really... who's going to go far out of their way to attend something called the National Hobo Convention? Com'on... I'm not a hobo. Am I? Sure, I'm a wandering itinerant, live "on the road" fulltime, and I do look for handouts along the way... I don't have a permanent home in a fixed location... and the only reason I'd consider "working" is if or when my money runs out. Hmmm. Maybe I have more in common with this hobo-thing than I thought.

So, since we're so close, just 27 miles away, and with nothing else to do on a cool cloudy Saturday, I guess we have a responsibility of sorts... to ourselves... to find out what we have in common with hobos and to learn a little more about what this lifestyle is all about. So off we went.

Like me, you're probably thinking that hobos were a sub-culture that had long ago died out. I was also tempted to believe this convention thing was mostly a put-on... a reenactment of sorts... like those people who dress up in civil war garb and reenact civil war battles on weekends. But, like me, you'd be wrong! Real, live, in the flesh, hobos still travel the rails and live a nomadic existence on the road, and a goodly group of them show up every year in Britt, Iowa for their annual convention. Color me red! Yes, the hobo culture still exists and, thanks to a couple sharp-minded civic promoters from the town of Britt, Iowa... way back in 1900... they have convened in Britt each year since. It's almost as if Britt could be called the hobo capital of the world.

We arrived shortly after 10am and the parade had already started. Those who procrastinate and are always late love parades... because we've learned that even though the parade has already started and that we're LATE, you can still see the whole dang thing by finding a seat near the end of the parade route. We sat with a group of locals under a big walnut tree and chatted for almost half an hour before the START of the parade finally, at long last, made it's way to us. And there, amongst the fire trucks, the wagons full of high school classes of old (61. 66, 81, etc), the classic cars and tractors (remember, this is farm country)... there... on a wagon full of real life hobos... on a raised seat way up top... was the Hobo King and the Hobo Queen from last years convention. This was their final spin around Britt before they surrender their exalted positions to a new couple who will be elected this very afternoon. 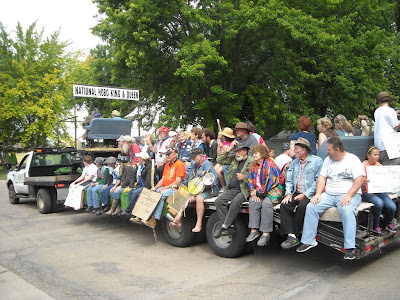 Hobos are all dubbed with monikers... nicknames that are a little more descriptive of the person.  For example, some famous Hobos from the past were Iowa Blackie, Fishbones, Hobo Lump, Bo Grump, and Cinders. 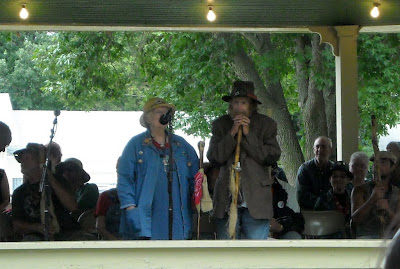 OK, so what is a hobo... officially. Well, this is it:  Hobos are workers who wander... an itinerant or migratory worker.


"The hobo is a migratory worker, some with a special skill or trade, others ready to work at any task, but always willing to work to make his way."

Closely associated, but distinctly apart from hobos are tramps and bums.  Tramps are those who wander and work only when forced to and bums are so lazy they will neither work nor wander. In other words, hobos are the creme-de-la-creme of all wanderers,  vagabonds, and nomads.

I'm growing a little concerned at this point. Since Dar has a special skill (nursing) and she does work (for a few months the past two years)... and let's see... she is certainly migratory (summer North... winter South)... she fits right into the definition of a hobo. As a mater of fact, she fits in so well she might be eligible for Hobo Queen some day.  However, with no special skill and since I'm certainly only going to work if I'm forced to... Oh Woe!... it looks like I'm a tramp!  May have to change the title of the blog to "Hobo and the Tramp".

A couple more hobo terms:  a "bridger" is a hobo that has ridden the rails behind both steam and diesel locomotives. There are very few "bridgers" left.  And a "rubber-tramp" is a hobo (or tramp) that has forsaken the rails for rubber tires... usually on an old car, van, or RV.  (Wait a minute... now that's hitting a little too close to home!)

Britt pulls out all the stops for this four day event. Saturday is the culmination, the high-point, of the week... with the parade, the election and coronation of the new Hobo King and Hobo Queen, and the noon Mulligan Stew feast, which is free (what did I say earlier about handouts?) and for which people line up for a city block or more to take as much of it as they can carry in whatever container they can bring. Almost everyone in line has a large pot, dutch oven, or recycled ice cream bucket in which to lug home the treasured Hobo Mulligan Stew. The good people of Britt make hundreds of gallons of the stuff, mixed and heated in a dozen or so large pots made from 55 gallon drums... and they dish it out in any quantity to anybody in line.

A mish-mosh of potatoes, meat, carrots, rice, vegetables, celery (don't know what celery is, but it's not a vegetable!)... really, whatever you have... Mulligan Stew is a traditional food of the road. As the hobos would gather and camp for the night, they'd contribute whatever "makins" they might have had, threw it all in one pot, and boiled it until tender and edible. That's Mulligan Stew! After the crowd ebbed and the line shrank, we got our free bowl and slurped it up. It's really comfort food for the vagabond.

We sat in the bleachers and listened to various hobos get up to say what was on their mind. A few have been on the road for 20 or 30 years. Some have homes, but still travel much of the year. Some recited poetry they had written, some sang songs. Then the electoral process began with each candidate for Hobo Queen addressing the crowd. After each had spoken, their names were called individually and the loudest crowd response indicated the winner. Same with the King. The now certified results for 2011... the Queen is Minneapolis Jewel... and the King is Uncle Freddie, who is one of the last remaining bridgers.

Deciding not to stay for the toilet bowl races, we walked back to the car and toured "The Jungle"... the hobo camp set up alongside the railroad tracks, and the Evergreen Cemetery (in keeping with the "cemetery theme of this week") where there's a special section way out back for hobo graves and memorials.

All kidding aside for one lousy paragraph... the event made me more aware of this real but dying subculture... that there are more similarities to us, as fulltimer RVers, than differences... and that we may not be far away from a resurgence of hobo-ism, of desperate people having no other choice but to live on the road, if we don't get this economy and our politics straightened out soon.

How much fun can a person have in one day?

Dar will have more photos uploaded in the next day or two, so check them out if you have a chance. And tomorrow, Sunday, we're off again. Westward Ho!
By Thom Hoch at 8/13/2011 08:00:00 PM
Newer Post Older Post Home