Wednesday, yesterday, was originally the day we had planned to continue westward. But after much research and some phone calls to the State and Federal campgrounds around Gavins Point Dam on the Missouri River near Yankton South Dakota... where we'd planned to stay through this coming weekend, it became apparent that, 1) every campsite that could be reserved was reserved for the upcoming weekend, 2) the few walk-in sites they have were currently full, and 3) even if we took a chance and snagged a cancellation or possible walk-in site it was going to be busy and congested. Hmmm. This is all to be understood... I mean, it's summer, August! Probably the busiest month of the year for family camping vacations. Add to that the big lake  behind the dam, and all the boating and other water sports activities... and all the population that lives close by -- Sioux Falls, Sioux City, Omaha... Well, we'll just make adjustments to the trip plan and chill out.

So, our "bird-in-the-hand" campsite here at Smith Lake County Park was beginning to look like the best alternative for the weekend. I mean, we're established here, we like it, and are still finding new things to do. We're still hoping to sample the Gavins Point Dam area but will do so no sooner than Sunday... after some of the crowd abates.

In the meantime, we did some local exploring yesterday. First on the agenda was the small well kept Union Cemetery a few miles out in the country northwest of our camp. A neighbor of ours here at Smith Lake turned us onto the historic significance of it. There's a story of mystery and folklore that's associated with it and I'll include a link here if someone wants to read the story, which is interesting but too long for this Journal. 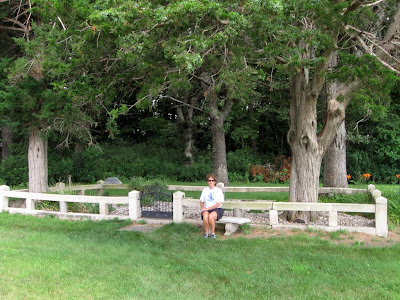 The next place on the tour was the village of Lone Rock, Iowa (pop. 100+). The story goes that a large rock laying out on the prairie became a landmark of sorts to early pioneers and settlers traveling through this area. It came to be called Lone Rock, and due to the trails leading to and from the monolith a couple settlers established a small crossroads community there in the middle 1800s. A few years later, about 1899, when the route of a new rail line bypassed the now larger town about 3 miles to the south, the good residents decided to move the entire town (everything except the rock itself) to the railroad. And that's the way things stayed until about 1970 when someone decided it would be a good idea to liberate the rock from it's lonely resting spot 3 miles to the north, out in the middle of nowhere... and finally reunite the rock with it's namesake community. Well, the estimated 175 ton rock didn't come easily and eventually had to blasted (with dynamite) into smaller and more easily handled pieces. Despite trying to reassemble the pieces into something approximating the original... trying to cable the chunks together... trying to put Humpty Dumpty back together again... they ended up with a broken rock. 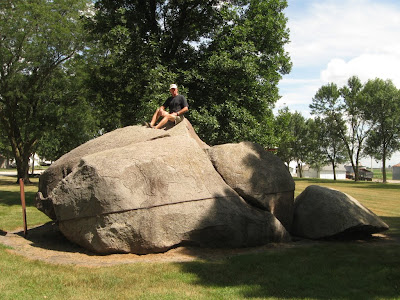 Some say the spirit of the town was broken along with the lone rock that day... the day it was blown apart. Others think it's just coincidence the town's decline seemed to accelerate after that. And still others see a moral  to this story:  the act of possessing something can destroy it.

And finally we drove to West Bend, Iowa and to the Grotto of the Redemption. Reputed to be the largest grotto in the world, it was the conception of Father Paul Dobberstein, a Catholic priest, who started building the grotto in 1912 and made it his life's work until he died in 1954. Others assisted Father Dobberstein and continued his dream even after his death. And yet today there's a dedicated group of people that continue to maintain and operate the grotto, and tend to the estimated 100,000 people that visit annually. 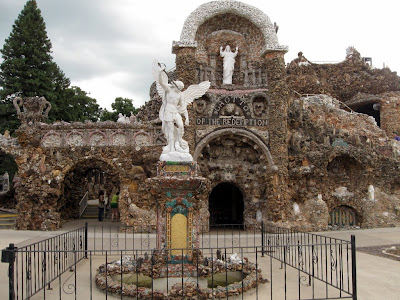 This is just something you don't see anywhere else. As much as anything, it's the scale of the work that impresses the most. The amount of effort to collect minerals from all 50 states and most of the countries of the world, to categorize and store the specimens, to plan the design, and to painstakingly apply each piece, one by one...millions of pieces over so many years... into this! 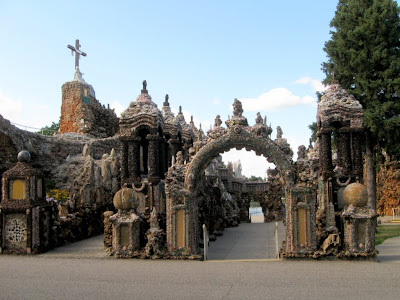 What an amazing accomplishment. We'd categorize this one as a "must see". And Dar has more photos of the day in our online photo albums... just click on the photo link above and check them out.
By Thom Hoch at 8/11/2011 01:29:00 PM
Newer Post Older Post Home