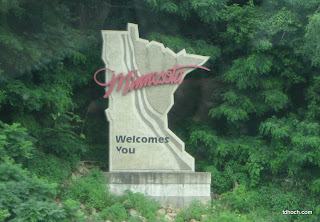 Woke this morning at Lake Pepin Campgrounds on the north edge of Lake City Minnesota which is situated on the west shore of Lake Pepin.


Lake Pepin is a naturally occurring lake, and the widest naturally occurring part of the Mississippi River, located approximately 60 miles downstream from Saint Paul, Minnesota. It is a widening of the river on the border between Minnesota and Wisconsin. The formation of the lake was caused by the backup of water behind the sedimentary deposits of the Chippewa River's delta. It has a surface area of about 40 square miles (100 km2) and an average depth of 18 feet (5.5 m), which makes it the largest Lake on the entire Mississippi River.


We're here primarily to spend a little time with friends Doug and Kay... a couple of adventurers we first met in Rockport but subsequently have crossed paths with several times. Their travel resume' contains years living on a sailboat in the Bahamas, wandering the Southwest in a motorhome, and much more. Doug is always thinking and coming up with new ways to approach the travel/snowbirding thing... and that's one of the things we like about being with these two. Even in this unconventional lifestyle most people fall into ruts. Doug and Kay are always clamoring to get out of the rut.

As far as our trip up yesterday we had the big wheels turning by 8:30am and it felt sooo good to be back exploring again. The path we followed was mostly two lane state and US highways... (SR33 to Portage, SR16 and US12 through the Dells, Tomah, and over to LaCrosse, over to Minnesota on I-90, and then north on US61 The Great River Road to Lake City)   Of the 215 miles we drove only 10 were on an Interstate... just the way we like it.


We did have a couple issues along the way. First, got another windshield ding... the fifth divot since the bus-house was new. Two have been "fixed", two were small and have not been fixed, and this new one, caused by a stone strike right at the bottom edge, is already running a 4 inch crack northward. At this point, it's not interfering with any views and if I could prevent it from spreading it'd be OK to just to leave as is.

The other issue is one I've been fighting with since Spring. The front hubs and bearings on the bus-house are running in oil. They're called Stemco hubs and they have a sight window so you can check the level and condition of the oil. The right side hub had a very slight leak which I think I addressed by tightening all the bolts and screws that hold the assembly together. But during our trip to Wisconsin in the Spring I noticed a milky-ness to the oil... a sure sign that water had gotten in the hub and mixed with the oil. During the summer I drained and replaced the oil in the hub... twice in fact. But during our drive yesterday the dreaded milky appearance to the oil returned. Hmmm.  We stopped at a FleetFarm store in Winona and bought a suction gun, another bottle of 80/90 oil, and a container to store the drained oil... and proceeded to change the oil in the hub right there in the store's parking lot. I'll be closely monitoring this situation as we head west.

And then there's the bus-house's dash A/C... which was only producing a slightly cool stream of air on this hot travel day. I've had the system "recharged" in the past, but there's clearly still a leak in the system somewhere. Of course, said leak could be anywhere between the front dash A/C coils and the compressor some 40 feet back on the engine... so why wouldn't this be easy to fix?

When you're dealing with a complicated hunk of machinery like the bus-house you've got to be willing to deal with issues like these. Before we started the Sabbatical, thinking about mechanical gremlins could bring on frightful fear and cold sweat. But after more than four years of living this way it's become part of the adventure.