Tuesday was a full day. First, we circled Lake Pepin by land... by way of The Great River Road on both sides of the big river. And we ended our day out on the lake on a J-30 sailboat... catching light evening breezes and watching the sun set behind the hills of Lake City. Our hosts, Doug and Kay, couldn't have done a better job of entertaining us.


Just north of our camp about 5 miles is the town of Frontenac. Situated on a bend in the river, it's a remote quiet area of huge old stately homes... a natural retreat recognized as such by wealthy folks from prior to the civil war. Stretching about a mile along the river and, perhaps, a half mile inland, the heavily wooded flat area is dotted with large lots and homes... estates really... some with outbuildings the could have housed domestic staff and livestock. Almost 150 years later, it's still appears to be a valued retreat for the upper-crust. 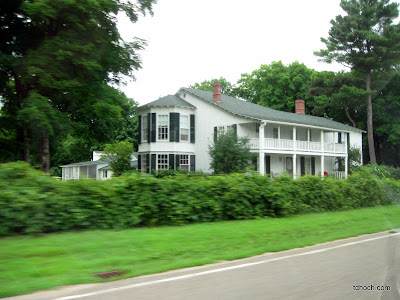 Actually there are two Frontenacs... Old Frontenac hard on the shores of the river (where the old big homes are located) and New Frontenac out by the highway and railroad... a more normal and modest collection of dwellings. Between the two is a large bluff that's the centerpiece of Frontenac State Park. We didn't check out the park, put off by the toll and our need to keep the wheels turning if we were going to make it all the way around Lake Pepin.

Another 10 miles or so north of Frontenac is Red Wing. Famous for the shoe company of the same name, Red Wing was originally settled in the mid-1800s for the wheat that could be grown in abundance in the surrounding fields and for it's location along the river that made it a natural shipping terminus. Valleys formed by a series of high bluffs contain the town and add to the charm of the place. It was designated a "distinctive destination" by the National Trust for Historic  Preservation in 2008, but the weak economy has taken a toll and Red Wing has been struggling recently with reduced tourism and challenging business conditions. Regardless, it's a wonderful place to visit, to walk along the riverfront, and meander among the well-kept downtown.

During our visit the water level of the river was higher than normal at this time of the year. Heavy spring rains and a big snowpack in northern and western Minnesota caused problems and dislocations all along the river this spring, and it's still high. The Corp of Engineers is dumping water as fast as it can, evidenced by the lack of difference between the high and low sides of the lock and dams we observed.

From Red Wing we crossed the river to the Wisconsin side and proceeded south on Wis-35... through the small river towns of Bay City, Warrentown, Maiden Rock, Stockholm, and Pepin. All along this route are pull-outs and historical markers where a traveler can stop for a while and enjoy views of the river and it's valley. Doug and Kay used to keep a sailboat in Pepin and were familiar with the Pickle Factory restaurant, where we stopped for lunch and a beer.

From Pepin we drove through Nelson to Alma where one of the best vistas of the area is available from Buena Vista Park, high on the bluff above the town and a COE lock & dam.


We back-tracked up to Nelson, where we stopped for an ice cream cone at the famous Nelson Creamery (a must stop for weekend tourists and bikers), and again crossed the river... this time to Wabasha Minnesota. Most of you may remember Wabasha as the town featured in the movies Grumpy Old Men and the sequel Grumpier Old Men. The story was based on the life of the writer's grandfather who did actually live there. But despite using the name of the town there were no scenes actually filmed in Wabasha. As a small town you grab onto whatever fame you can I guess.

So it was back to Lake City where Doug and Kay surprised us with an evening sail on their son's J-30 sailboat. The winds were light but enough to move us along at good clip... and perfect for enjoying the views of the town and the surrounding bluffs illuminated by a red setting sun. As sunlight faded and stars made their appearance the sound of water lapping on the hull was so relaxing I could have spent the night out there. 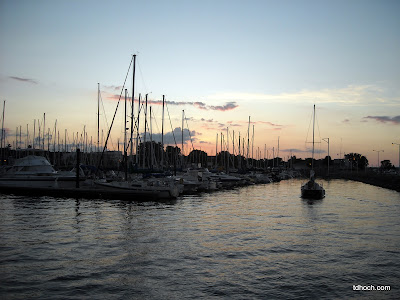 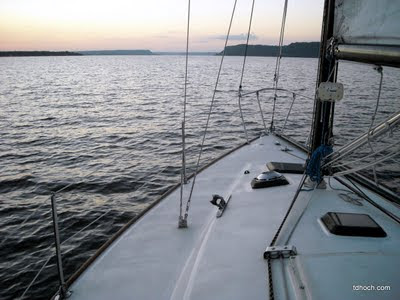 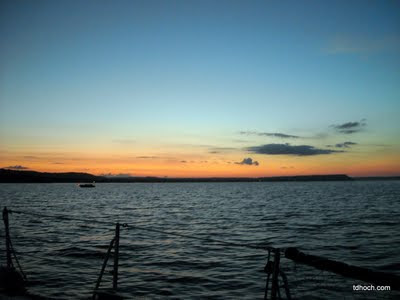 Doug, Kay... thank you so much for a great day.