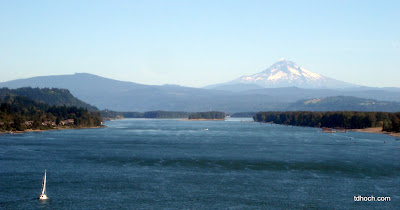 It's been days since my last post and it's time to update the journal. We're still here in the Portland/Vancouver area visiting family and will be for about another week. Our main focus has been the two hombres (aka the Grandsons) but we're also trying to fit in some visits with friends from the old days. While here we get to attend birthday bashes and other extended-family events and get-togethers.

Then there are the occasional local explorations like the one last weekend where Grandson Ryan and I made an assault on Beacon Rock about a half hour up the Columbia River Gorge. This over 800 foot tall monolith is the hardened lava plug of an ancient volcanic vent... the rest of it eroded away long ago. Named Beacon Rock by the Lewis and Clark Corps of Discovery, it's a landmark of note that's hard for me to ignore. And by the way, both the 6 and 60 year old explorers completed the climb with energy to spare.

The weather is changing too, from the normal quiet dry and sunny period typical of August and September in the Northwest to a wetter colder pattern that portends the winter ahead. There are still some really nice days ahead yet this fall but the inevitable change has clearly begun. One need look no further than the parade of RVs leaving the RV park and nosing south as evidence.

We're still unsure of our path once we fall in line... just haven't taken the time to think much about that yet. 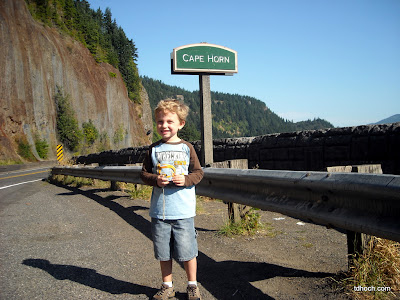