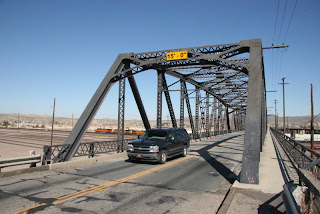 This morning. Southbound on North 1st Ave in Barstow. We crossed the dry Mojave River and then started a twisting climb to a bridge that carries traffic over the very busy BNSF railroad tracks through the middle of town. That's when I saw the sign... a small one... but it got my attention:  Bridge Weight Limit  - two axle vehicles = 7 tons;  three axle vehicles = 11 tons; four axles or more = 15 tons. WHAT????

The bus-house is a two axle vehicle and it weights a bit less than 16 tons all by itself. The toad, considered a separate vehicle was well under the restriction... but the bus-house! Sheesh. And we're only a thousand or so feet from turning onto the sagging span, which I can now see is all shored up underneath with what looked like puny little 2x4s. OH MAN... gotta act now! 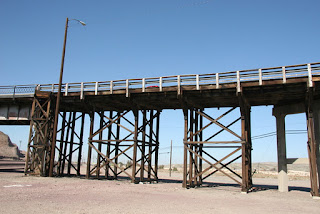 There was only one opportunity to turn before I was past the point of a no-hassle return. If I went past that final intersecting street, which was now only 30 feet away, there were only three possible outcomes... and all three of them would have been more exciting than an "E" ticket ride at Disney or base jumping from top of the Glacier Point in Yosemite. Outcome 1: stop in the only lane of traffic prior to getting on the bridge (there's no shoulder or emergency lane at this point), save the bridge and who knows how many lives, and create a major Barstow scene complete with angry police, live radio news crews, hovering helicopters, screaming and honking motorists now stopped and going absolutely berserk, not to mention nowhere, and an onboard navigatress/safety director/spouse who would have quickly joined the raging mob in fashioning a noose for my neck. (Hey sweetie... you're the navigator... didn't you see this coming? No? OK, you're right...it's my fault... I should have done better... It'll never happen again... hey, why are you tying the end of that rope to the bridge beam?) If I had selected this outcome the result would have been fines, unhooking the toad and backing every car and the bus-house off the bridge approach, headlines, embarrassment, and likely divorce.

Outcome 3 is very close to Outcome 2, except that the bridge doesn't collapse and we make it safely to the other side with only my heart in my throat, sweat suddenly pouring off my face, and a brown mess in my shorts. There are all sorts of possible endings to this one that could still involve tickets, jail time, and, again, divorce.

You see, there was no good way out of this mess unless I take this one last turn, this final opportunity to prevent all the bad things mentioned above from becoming part of my lasting legacy. (I could hear it now: Did I ever tell you about old Grandpa Thom and the day he crushed the First Avenue Bridge in Barstow? Well, gather round kids... this is a good one...) It's amazing what can go through one's mind in just a few micro-moments at a critical time like this... similar to seeing your life pass completely before your eyes as you're dying. And, believe it or not, all these thoughts did actually go trough my mind in those few micro-seconds as we were approaching that last chance turn. 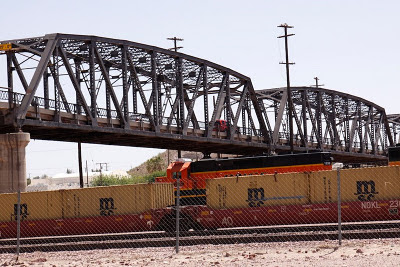 OK... we're now only 20 feet from the turn... and I make my decision.  I smoothly apply the brakes and simultaneously flip on the right turn signal. The bus-house responds. Remember, I really don't know where this road goes... and I really don't care. The prime directive at this point is to defuse the bomb that was about to bring down the old 1st Ave Bridge. And then we're on that little side road... and what do you know... just a block down that road is a large open parking lot where I could smartly and quickly execute a 180 degree turn and head back toward the intersection, where I turned left, away from the bridge, and away from certain doom. And just think how many lives I probably saved today.

It took a little longer to get to our destination today, but there was absolutely no complaining to be heard.

I think that's all I'll say about that.
(the attached photos were pulled from the internet. Neither of us were thinking about photos at the time.)
==============

Tonight, we're safely dry-camped at the Black Rock Campground just inside the northwest corner of Joshua Tree National Park. A primitive campground by almost any standard, it was a two hour project to find a site for the big ol' bus-house... one with a little height clearance to keep the stiff and scratchy Joshua Trees from gouging our roof or sides... one that we could get half-way level on. It's times like this I REALLY crave a much smaller rig. After two hours of trying this and doing that, we're settled and happy again. As challenging as this dry-camping and boondocking thing gets sometimes we still prefer it to many of the RV parks out there. At least most of the time.
2011 Oregon to Texas California Life in 300 Square Feet National Parks
Location: 9800-9998 Black Rock Canyon Rd, Yucca Valley, CA 92284, USA