First off, as a follow up to the "bridge" post from a couple days ago, I went back and found some online photos of the thing from different perspectives and added them to that post. It might help... especially the photo of the wooden braces that had been added to keep the rickety old thing up on it's pilings. I also found a newspaper article from the "Desert Dispatch" from earlier this year that highlights the problem... but, in all honesty, for me it prompts more questions than provides answers. 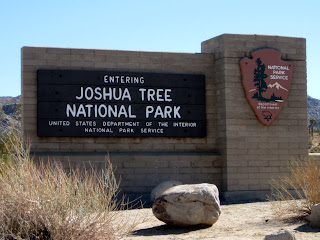 Yesterday, Tuesday, we explored Joshua Tree National Park. The Park's namesake, the Joshua Tree, is a unique plant that is actually a variation of the Yucca (Yucca brevifolia) and only grows in the southwestern United States. At home between about 1,500 and 6,000 feet of elevation, the presence of Joshua Trees is a good indicator that you're in the Mojave Desert. They grow quickly from seeds... perhaps 3 inches per year in their early years. Once established the growth rate slows to just an inch per year. The tallest Joshua Trees are about 40 feet. If conditions are optimal, Joshua Trees can survive for over a thousand years, although these days with climate change and pollution as factors, the average age is much less. 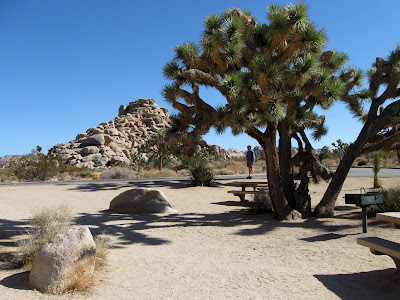 Driving through the forests of them makes me think they're a lot like fingerprints... no two are alike. The diversity of shapes, sizes, heights, and number of branches is dramatic. Their evergreen leaves are dagger shaped, stiff, with sharp serrated edges, and ending in a dagger-like point.  They flower in the Spring, but not every year... and they only branch where they produce flowers. They do not produce growth rings like trees, which makes assigning an age to an individual difficult. 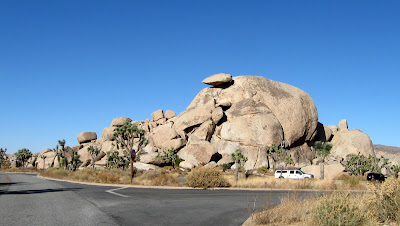 The other unique feature of Joshua Tree National Park is the abundance of unique rock formations known as inselbergs or monadnocks. Formed a hundred million years ago, or thereabouts, by molten magma rising into the upper levels of the earth's crust... like blobs in a lava lamp... and then cooling and solidifying prior to reaching the surface. Over many more years these underground formations were fractured and eroded by immense quantities of groundwater flowing down and around them. Then, as the land holding these features was worn down by further erosion or uplifted by other plate forces, they were exposed and weathered further into the shapes we see today. Some, alone in the desolation of the desert, appear as huge piles of jumbled boulders. Others, grouped together, form ridges that extend for miles. Their vertical faces are a favorite of rock climbers, many of who were out yesterday during our tour. In fact dozens and dozens of them who, somehow, don't have to work to keep themselves entertained. Sort of like us... gotta love it. 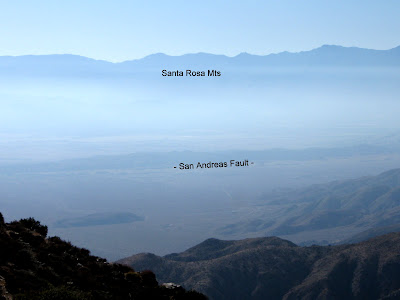 We drove down to Keys View overlook, peering down almost 5,000 feet, at Palm Springs and the Coachella Valley far below. At least we were told Palm Springs was down there... couldn't see it or verify it as the smog, fog, haze, and air debris was too much to see through. It was possible to see the ridge that marks the San Andreas Fault... the source of most of the ground tremors and earthquakes in California, the probable cause of much of the weirdness, and the likely reason Joshua Tree National Park will be ocean-front property one of these days.

Today we took a day off. Spent some time working on photos, writing, and looking ahead. We leave here tomorrow, Thursday, and are still not totally sure where we'll end up.

And Dar has more photos from our day in Joshua Tree National Park if you follow this link to our online albums.
By Thom Hoch at 11/16/2011 05:51:00 PM
Newer Post Older Post Home