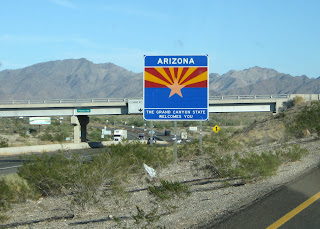 It took a little longer than usual to complete moving-morning chores... that, and perhaps sleeping in a little later than normal... but we finally got the bus-house rolling out of Black Rock Campground in Joshua Tree NP a little before 11am. Our objective today was Quartzsite, AZ, something less than 200 miles distant. At first I thought we'd circle around the top of the Park on the north and east sides (CA-62 to CA-177) and hit I-10 for the run into Arizona. But that changed to just running right down through the middle of the Park on Park Boulevard and Pinto Basin Road to the Cottonwood Spring area and out the south gate just a few miles from exit 168 on I-10. There are no size restrictions that I could find on that route and a ranger I asked didn't seem at all concerned.

While we did survive the drive just fine, thanks in part to the lack of other traffic, running down Pinto Basin Road was a challenge at times. The road is very narrow in places and the pavement had seen better days (like maybe in the 1960s), but we managed to get our eyes on the many square miles of back-country in this less-busy area of the NP. Back in September this part of the Park had 3 inches of rain in less than a day, a rare event apparently and the resulting crazy rush of flowing water washed out portions of the road and much of the Cottonwood Campground (which is still closed) near the south entrance. The Park Service scrambled to get the road operational again -- in some areas the repairs are only temporary. We were by far the biggest vehicle we saw all the way through the Park, an observation probably shared by most of those we passed along the way.

But once on I-10 (I know... "it's an Interstate... and you hate Interstates...") the rest of the day was smooth and uneventful. I was nursing our diesel supply... driving for maximum mpg... to avoid having to pay the penalty for buying fuel in the fine state of California. We coasted into Ehlenberg, AZ, right on the border, on fumes (never having run the beast totally dry, I don't know how low it can go before "sucking air") and put in 83 gallons (in a 100 gallon tank) at a net savings of about 35 cents per gallon... enough for 3 or 4 meals worth of groceries.

A half hour later we were at our favorite little spot in the desert just outside of Quartzsite... the same place we camped for a few days last fall. Quartzsite isn't everyone's "cup o'tea"... especially if they've been here during the big busy RV Show in January. But in November and December it's a different place in our experience. Our closest neighbor is maybe 500 yards away, and, as of tonight, we can see only three rigs total. We parked so our "picture window" windshield is pointing west... to savor those legendary desert sunsets. Today, Friday, afternoon temps were in the mid 70s after morning lows in the upper 40's. I think we can live with that for a few days. 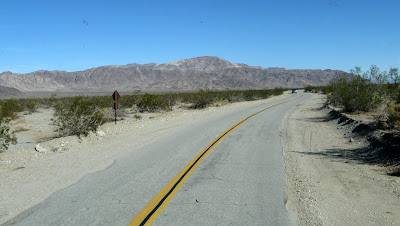 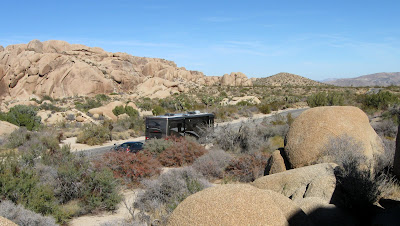 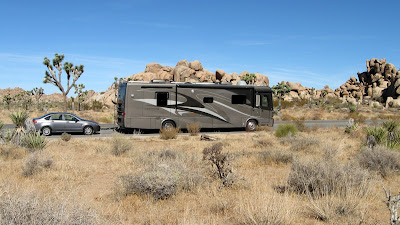 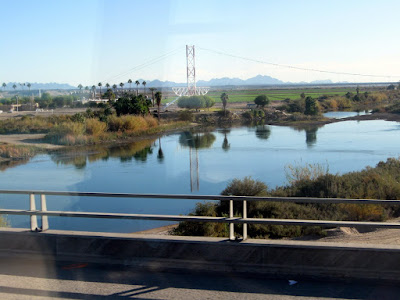