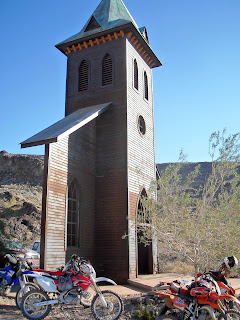 Well here's hoping we didn't lose any readers during all the Black Friday consumerist shopping riots earlier today. I'm hearing about folks being pepper sprayed, shot, stabbed, and worse... by other "shoppers" who feel they need something bad enough to set aside normal civil behavior and bring out the heavy artillery to gain some kind of advantage. I mean, what are they thinking? Do they sit up the night before and plan this? Never having been to a shopping riot I guess I should give folks the benefit of the doubt... that perhaps the store is really at fault for whipping people into a frenzy and all. I don't remember Christmas shopping being at all like this when I was a kid.

For our excitement we headed out to the Nellie E Saloon for lunch. This isn't as easy as it sounds though. First you've got to drive north of Parker some 5 miles on the main highway, AZ-95, and try to find the intersection with the old rocky dirt road that leads to the bar, another 5 miles out in the desert. This being a holiday Friday and all, a lot of folks are off for a long weekend and were out in force with their 4-wheelers, ATV's, pickup trucks, and jeeps tearing up the desert and creating both a dust storm and a lot of traffic. It certainly wasn't a quiet lonely drive out into the desert.

The road is primitive and we were one of only a few out there with a car. There were a few places the road was probably more than the little Ford Focus was ever designed to be navigating, but after 20 or so minutes, we topped a hill and there, before our eyes, was what locals call The Desert Bar... the Nellie E Saloon.

You probably won't believe it when I claim there had to be six or eight hundred people gathered there, maybe more, enjoying the bright sunny afternoon, the eats and drinks, and a very good band -- The Happy Ending Band -- playing some of my favorite Rock and Roll music from the 60's and 70's. Finding a seat was tough, as you might imagine, but we scored two at one of the bars right after we ordered lunch. 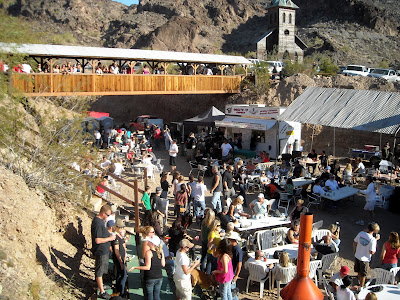 There are no power lines running out to the bar. Instead, banks of solar panels on various roofs here and there provide the power to run the place, although I suspect that despite a strong Arizona sun there's not an abundance of power. Ice box refrigeration is dedicated to keeping beer cold, but there's no cheese for your burger... ever (a sign says). The menu is brief... hamburgers, hot dogs, chili, chili-burgers, or chili-dogs. Since they have so many people from California stopping in, they have added a veggie-burger... but my guess is it doesn't sell very well. Prices were reasonable: $3 for a burger, $3 for a diet beer, slightly more than $3 for some of the other concoctions.

There is a well on the property now. The owner, a fellow named Ken, used to have to haul water out from town in an old fire truck. But the truck is parked now and water isn't quite the precious resource it once was. I'm not sure what they do with waste water, but I'm hoping it gets hauled back to town and not dumped in the old mine.

Did I mention how good we thought the band was?

The saloon is built on various hills, piles of mining debris, and a deep scar (an old mining cut? a wash?) in the desert that combined give the place a multi-tiered, sculpted appearance. That lowest level, the scar (don't know what else to call it) is where the band was staged, as well as a good percentage of the customers. A long bridge soars overhead, connecting one parking area to the main upper bar area. All the structures, including two tall cooling towers, appear to be unplanned and built on a "seemed like a good idea at the time" basis. Perhaps best called "desert primitive"... it works... actually adds to the ambiance.

Given the choice between battling shoppers on Black Friday or scrambling over rocky roads, around swarms of ATVs, through clouds of dust, and a plugged air filter in the car, to find a happening place like the Nellie E Saloon... I'll opt for the saloon every time.

More photos from our afternoon can be seen at our online photo album. 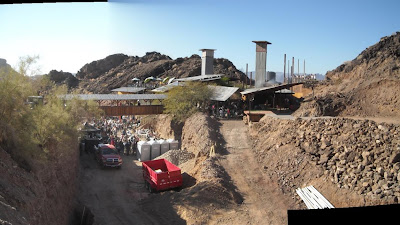 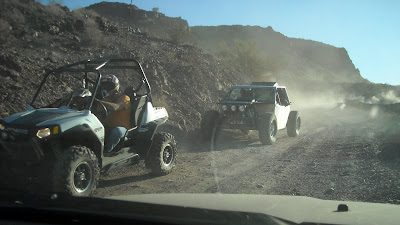