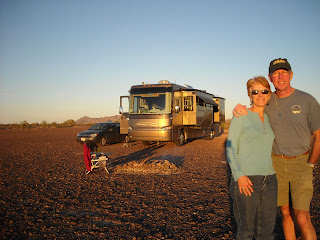 It's Sunday already, which means we've got to start packing up, stowing things, in preparation for moving tomorrow. Even if we wanted to stay longer (no argument from either of these two nomads), we're running a little low on some resources that require movement of the bus-house... things like fresh water and propane which are the two we'll run out of first. So since we've got to move anyway, and since we're still planning to be in Rockport by just after the first of the year, we're getting back on the road.

I've got two tires with slow leaks. The right rear tire on the toad has leaked since the day I had new tires put on last summer. It's very slow and it's been my denial of reality that's prevented me from having it fixed before this. But I added air just a couple weeks ago... even put in a little extra. But when I checked it yesterday, it was down to 26psi... a full 10 pounds from where it was. The other tire is the front right bus-house tire. Damage or a puncture isn't obvious, and I've examined it pretty closely. I'll get both pumped back to where I want them before we leave tomorrow. In the back of my mind I'm wondering if the pressure pro sensors have anything to do with this problem. They work by by-passing the dill valve that normally holds air in a tire, and have their own seal. If that seal isn't perfect I think it could account for what I'm experiencing. After getting the bus-house tire back to full pressure, I'm going to run without the sensor on that tire for a while and see if that makes a difference.

We ran into Q yesterday to restock on firewood. Our source (and new BFG - best firewood guy) is Alex, who runs a rock and mineral shop down close to the Post Office. We bought three big boxes for Thanksgiving Day, all of which was turned to ashes that day.  Another three boxes was procured for our last two nights fires.

Toward the end of last nights campfire, well after sunset, we were entertained with the awesome desert night sky show. A fingernail moon, in close proximity to Venus, was chasing the sun and setting in the west. Clouds of stars in the Milky Way appear to combine into a single band of glowing gas stretching overhead from both horizons. High in the eastern sky was Jupiter. With our little spotting scope we could easily see bands of color on it, the largest planet in our solar system, as well as all 4 of it's largest moons.