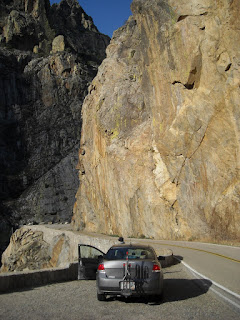 With the bus-house safely parked at SKP Park of the Sierras, where we've been based for the past two weeks or so, we packed up the toad and headed toward Kings Canyon and Sequoia National Parks. We planned to spend two nights in the John Muir Lodge in the Grants Grove area of Kings Canyon NP... our first foray away from the bus-house since our trip from Wisconsin to South Carolina this past April. We're beginning to realize that the expense and hassle associated with moving the bus-house is, at times, hard to justify, especially when the object of the exploration is remote and with few if any facilities for a huge camper. In this case, it wouldn't be possible for us to drive the bus-house through the Parks as a number of roads have 22 foot maximum length restrictions. Additionally, a recent snowfall has made tire chains mandatory on many of the roads throughout the Parks... and tire chains will never be put on this rig while we have it. It became clear that if we were going to add these two Parks to our list of visited National Parks, the only way to do it this year would be with the toad.

The drive was 90 miles, through Fresno on CA-41, then east on CA-180 to Grants Grove. From the 1800 foot elevation at Park of the Sierras we drop to just a couple hundred feet at Fresno in the San Joaquin Valley, and then climb back to 6600 feet at Grants Grove. There are no roads that go east/west through this region as the highest and most rugged portion of the Sierra Nevada Mountains, including Mt. Whitney (14,494'), the highest point in the lower 48, is along the eastern edge of the Parks. 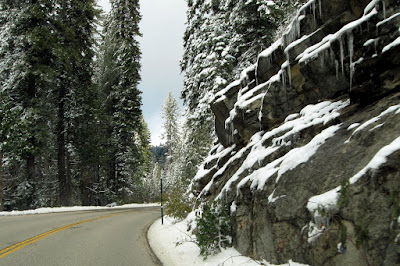 We arrived at Grants Grove about noon, did our usual Visitor Center thing, including the orientation video, checked into a room at the John Muir Lodge (winter deal... only $79 per night... almost half of what they go for during high season), grabbed a quick lunch, and then headed out and down into Kings Canyon just to the north of Grants Grove. 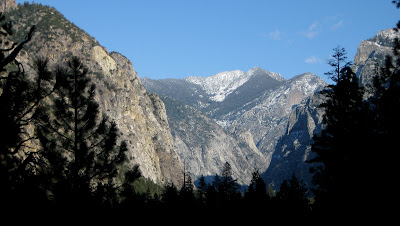 Once described by John Muir as even more spectacular than Yosemite Valley, Kings Canyon is certainly someplace anyone in awe of nature must visit. The road from Grants Grove descends more than 3000 feet to the valley floor. Many "turn-outs" on the way down provided stunning views... on this day illuminated by a low afternoon sun and bright blue skies. Once on the valley floor and alongside the flowing South Fork of the Kings River, you're at first in a "V" shaped canyon -- the signature of a canyon cut by flowing water. But further up-canyon, as you get toward the end of the road (literally called the "Roads End" area) the canyon takes on a "U" shape, with a wider flatter floor -- the distinctive shape of a canyon cut by flowing ice... glaciers, perhaps thousands of feet thick. This is the same process that cut Yosemite Canyon, about 70 miles to the northwest. Recent snowfall was being melted by relatively warm temps while we were there, so the streams and waterfalls were flowing nicely. 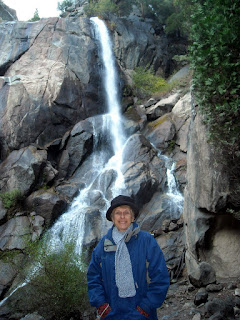 The entire trip into the canyon was about 35 miles each way. As referred to above, it's a dead end so the return trip provides the opposite view of that seen on the way in. We pretty much killed the afternoon along this stretch of road... and more time would have been nice. But days are short this time of the year, and even shorter in a deep canyon. So we bowed to the inevitable and returned to the Lodge before night fully arrived.

The Fireplace in the Lodge
Both nights during our stay at John Muir Lodge we warmed ourselves in front of the fireplace in the lodge. We met some interesting people, some of whom we could even communicate with in our native language. (Had some trouble with a foursome from near Paris, France). But the crackling glowing fire did more than our warm toes... the scent of glowing oak embers, the flickering illumination from low flames, the sounds... the pops and crackles that only a real fire emits... it warmed our spirits, it made us feel that we were really home despite never having been here before. 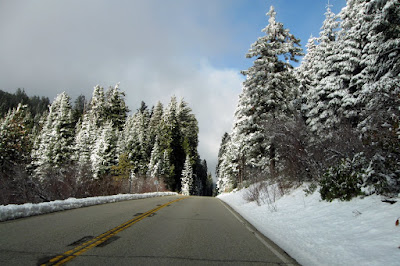 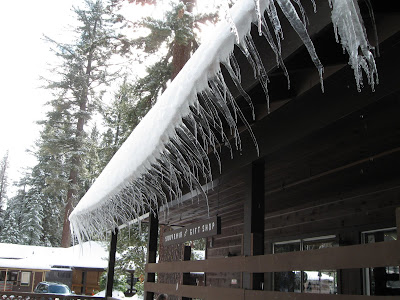 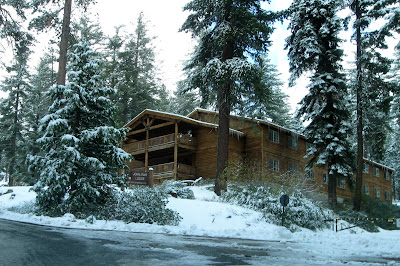