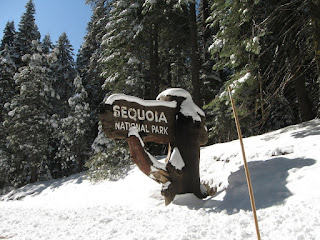 With a hearty hot egg breakfast onboard, a bag of crunchy gorp, a cup of hot coffee, a new set of cable-chains for the toad, and an OK from the Park Service that the road from Grants Grove to Wuksachi Village and the Lodgepole Visitors Center in Sequoia National Park is finally open, we were off on the days adventure... to explore the big trees, the largest living things on the planet, known as Giant Sequoias.

Since the recent snowfall prior to our arrival on Monday and until this morning, the only road that connects to two National Parks, known as Generals Highway, has been closed while they clear it of 6 or 8 inches of snow and ice. Warmer temps during the past day or two were helpful and hope turned to reality... and the road is now open. We somehow timed our visit to coincide with a string of three days of great weather. 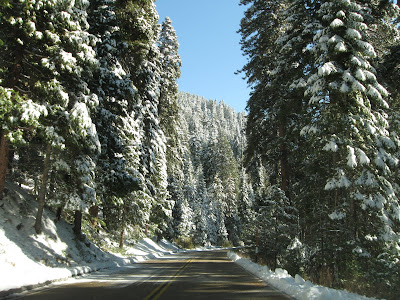 It's common up here to have fog/clouds alternating with clear blue skies throughout the day. And today was not uncommon. Generally the about 25 mile drive down to Lodgepole was bright and clear, while the return trip later in the day was mostly cloudy... actually in the clouds... perhaps more accurately called fog. 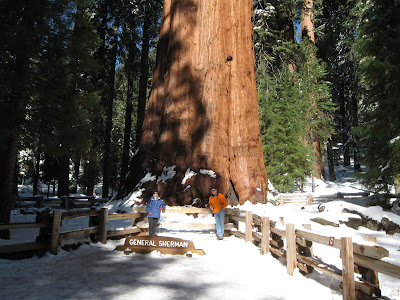 General Sherman
The largest known living single stem tree on earth is a Giant Sequoia known as the General Sherman Tree. At 275 feet tall... it's not the tallest tree; with a diameter of 25 feet at the base... it's not the widest tree; and at an age of about 2,500 years... it's not the oldest tree.  It's among the largest tree in every category, but with an internal volume of more than 52,000 cubic feet, it's claim to fame is that it's the tree with the greatest volume.

Giant Sequoias have at least one thing in common with people:  they quickly grow to their full height early in their lives, and then spend the rest of their lives putting on weight and getting fat. They're so big, it's hard to appreciate their size... to really get your arms around them (both literally and figuratively). And trying to photograph one is always a challenge with usually disappointing results.

Giant Sequoias only grow here, on the western slopes of the Sierra Nevada Mountains, in about 60 small groves that comprise only about 35,000 acres. At one time, in the late 1800s, they were being cut down and turned into shake shingles, match sticks, or toothpicks... as the wood of the Sequoia is fibrous and brittle and generally not suitable for construction. It could take a team of lumberjacks up to two weeks to cut one down. Before they were all cut down, a few key people, John Muir and others, began to take notice, helped others take notice and realize what was happening, and took steps that lead to the preservation of the remaining giants we see today.

John Muir noted that the Sequoia is as close to immortal as a living thing can get. They are highly resistant to disease, insects, and fire. Their soft bark can be up to three feet thick at the base. Growing fatter every year, the way they typically die is that they become too heavy to support themselves, and they topple over... they fall down. It's highly unusual to see a standing dead Sequoia. And once they fall, they're very slow to decay due to the high tannin content of the wood.

We love old trees. A couple years ago we hiked through deep snow to spend time with the Bristlecone Pines in Great Basin National Park. And now we've had time to commune with the Giant Sequoia. They have a way of putting things into perspective for us.

We made our traditional stop at the NP Lodge for a beer and it evolved into lunner. Wuksachi Lodge is a rather recent addition to Sequoia NP, replacing guest accommodations that had been centered about 5 miles south in the Giant Forest Lodge Historic District. But after many years of wrangling the Park Service decided in the 1990's that the whole lodge district had to go in order to save the natural elements of the Giant Forest. 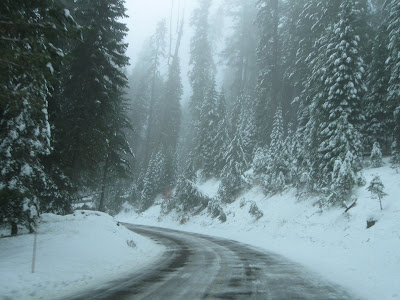 Even though the road was open today, there were large icy patches that kept our speed down and nerves on edge... especially where just a few unguarded feet from the edge of the road is a sheer drop off of a thousand feet or more. On our return drive we came across a couple young women who had an accident that left their car in a ditch and against some rocks. After checking that they were OK, and checking cell phone service (there was none), we told them we'd proceed, alert the authorities as soon as we could, and get them some help.  And that's exactly what we did... our good deed for the day.

We then huddled in front of the fireplace again at John Muir Lodge... and pondered the mysteries of life and wine.
By Thom Hoch at 11/08/2011 09:00:00 PM
Newer Post Older Post Home