Our last morning in the Kings Canyon/Sequoia National Parks. We thought we'd spend the morning walking among the giants... the Giant Sequoias in Grants Grove.

General Grant
First up was a visit to the General Grant tree... the undisputed second largest tree in the world.
As with General Sherman, the slightly larger first-place tree, General Grant is huge but hard to comprehend. Even comparing it to nearby mature and taller Sugar Pines -- themselves huge trees by any normal standard, the Grant Giant makes them appear as mere nursery stock and your mind tends to remove them from the scene.

Most of the trees in the Grove are not Sequoias, and only a very few are truly "giants". But as you walk the giants call out, grab your attention, their deep dark red bark illuminated like the only color object in a black and white photograph. They call out, you turn and look, and say "Wow" as your mind tries once again, unsuccessfully, to really comprehend the scale of size and age.

The Sounds of Silence
The morning was so clear and quiet, we decided to hike a few miles through the giants to experience the park from a different perspective... to experience Sequoias away from the touristy setting of the big signature trees and meet them in their undisturbed natural setting... more on their terms. The snow-covered trail was deserted... never saw another person during either of the two longer hikes today. There was virtually no breeze. The crunching of snow beneath our boots, the shooshing of fabric as legs and arms worked, the alternating in and out breathing... those were the only sounds from us. The forest had it's own set of sounds... snow captured on high evergreen bows melting and raining down... the occasional "snowball" thrown at us by one of the trees... a small snow-fed stream coursing over rocks in the ravine alongside the trail... the screech of a hawk off in the distance. We stop often, halting our own noise, and just listening to the sounds of the forest... and amazed at the natural ruckus that makes up all that silence. 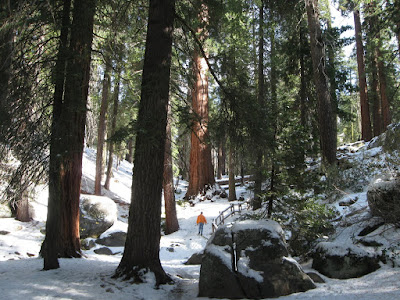 Our first hike was to an overlook of Sequoia Lake. Along the path we visited the rare Dead Giant... the only standing dead Sequoia we saw during our three day visit. As I wrote yesterday, Sequoias are highly resistant to disease, insects, and fire -- the three things that often kill normal trees. Giant Sequoias die by falling over... having become too heavy for their shallow root system to support. So a standing dead Sequoia is very unusual. This one, the story goes, was vandalized many years ago... girdled... strangled for who knows what reason.

Big Stump Trail
The second hike of the morning was Big Stump Trail a mile or so south of Grant Grove Village. Here, we hiked a mile or so to a meadow, around which are the stump remains of a grove of Giant Sequoias that were chopped down in the late 1800's... like so many others. We circled the meadow and felt the presence to the big trees, more than 100 years gone, through the immense dark gray stumps that seemed to have gathered in groups. The wood of a Sequoia is stringy and brittle and not at all suitable for construction. They were cut down, some shattering into useless piles of scrap as they were crushed under their own weight when they hit the ground. The wood that was usable was commonly split into wooden shake shingles, or planters stakes, or match sticks, or even toothpicks.

Just off the meadow was the stump of the Mark Twain Tree. The Mark Twain Tree was cut down in 1891 so that slabs of its 16-foot diameter trunk could be displayed in New York and London museums. A similar giant was felled so that a 30-foot tall section, hollowed out to create a two-story house, could be shown at the 1893 Chicago World's Fair. There are some that believe the publicity from stunts like these actually helped the cause of saving the Giant Sequoias, as public sympathy became support for preservation.

Then, it was back to the bus-house and making preparations for leaving in the next few days.