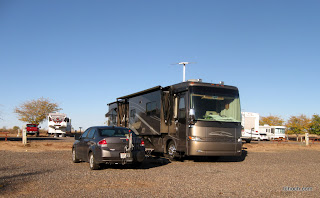 For all you folks who think it's easy to escape Winter by just heading south a few miles, consider this. We're about an hour northwest of Phoenix (yes, Arizona!) at an elevation of 2800 feet. The normal temps this time of year are 60's for a high and 40's for a low. Of course, "normal" or average temps are statistical deceptions, often, and it's prudent to use them with caution. Our high temp yesterday was 45f and the low this morning was 31f. Monday morning we should be in the 20s.

Yesterday, we had it all... sun, heavy clouds, rain, thunder, sleet, snow, and then more sun. So we huddled inside and I only got out for my two mile walk... between showers. Not what most people would expect... unless you're in, maybe, the Midwest??

This morning we ran into Wickenburg for breakfast and then explored around the town called Congress (as rough as it looks it's more popular with the public than the other one in Washington DC). From Congress, AZ-89 goes up the side of a mountain ridge to another small town named Yarnell. Although only 10 or 12 miles from our camp at North Ranch, Yarnell is 2000 feet higher. And, yes, there was some small remnants of yesterdays snowstorm still laying around in Yarnell.

Tomorrow, Monday, we're breaking camp and heading into the maw of the Phoenix megaplex. We're going to take advantage of a Cummins/Onan/Spartan Coachcare location down that way to primarily have our generator inspected and serviced. I may be over-sensitive about these things, but I'm just sensing that it (the generator) is not running as smoothly as it did in the past. Since we're so close, we might as well take advantage of the opportunity. The shop allows overnights and they have a few plug-ins to facilitate doing so... and we'll probably spend tomorrow night there before heading further south to Tucson and then Benson.

This afternoon we're listening to the loss-less Packers on the radio and I'm making a pasta dish of some kind tonight, both of which can only be called winners.