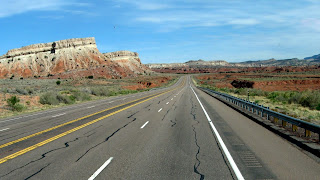 The weather forecast for the weekend didn't look good for our intrepid explorers, and we had to decide whether to ride out a day or two of rough conditions down in Santa Fe, or up in Cortez, CO., our next planned stop. A short window of calmer conditions seemed to exist on Friday and, if we were up to the task, we could make the drive into Colorado, wait out the Saturday-Sunday problem up there... and then be ready for Mesa Verde National Park on Monday. And that's what we decided to do.

For the second time in a row we got an early start, on the highway by 8:15am. A quick stop for fuel in San Felipe, and we were again heading northwest toward the Four Corners area. The landscape along US-550 was desolate and beautiful. Colorful mesas and buttes were everywhere. With a little research I found a consensus about what the difference is between a butte and a mesa (and a plateau).  It's all a matter of size. Think of a high plateau with rivers starting to erode all of it's sides. Eventually, the rivers erode enough material that the flat top is isolated from the surrounding geography. The plateau has become a mesa. When the mesa continues to erode and becomes smaller and smaller, eventually the flat part on top is smaller than the sides are high... and the mesa has now become a butte. Buttes may have small flat tops, but eventually, the flat top gives way to a jagged or peaked top. Now you know.

We stopped at a diner in Bloomfield for lunch, followed by a heading change to the west on US-64. We've been on a lot of bad roads over the years of the Sabbatical, but the stretch from Bloomfield through Farmington was among the worst. There were signs that they might be thinking about working on it... but it's a POS road in my opinion. We saw a lot of oil field work in this part of the world and while this activity provides jobs and adds to the economy, it, in my experience, does nothing for "quality of life" conditions in the affected towns.

Off in the distance was Shiprock Peak, standing stark and tall on, what one could easily imagine, a broad flat rough sea. Arrrgh!


A turn to the North at the town of Shiprock (wonder how it got that name?) took us the last 45 miles or so to Cortez, CO. This road, US-491, was a bit of a challenge too. Occasional dips in the road surface, ranging from small whoop-dee-doos to very deep "OMG... we're going to bottom out and rip the jacks off the bus-house" drop-offs made for a challenging and slow journey. We learned to identify the dips and judge their severity by the amount of oil (from ripped open engine oil pans??), rubber (from tires going airborne and coming back to earth again??), and vehicle wreckage on the side of the road.

Arriving in Cortez about 2:30pm we found the more affordable Passport America RV Park closed for major renovations. But our back-up, Sundance RV Park, was open for business and had room for these two tired travelers.

We'll settle down for a day or two and let the weather do what it will do. Can't do anything about it anyway. And we like having a day or two like this once in a while to get caught up on our work. With plenty of  photo-processing and writing to do, we'll keep busy.

A few housekeeping notes: Dar's been working hard at updating our photo journal. Over the next day or two, new albums from recent travels and explorations will be available. We keep this photo journal as an adjunct to the blog, and it really adds another valuable dimension to our story. I'm also starting to put a link to each exploration day's photos in the bullet-point header info at the top of each post.

Second, I've got an updated interactive map for our 2012 travels on our map page. Just click on the "Maps" tab, and see a chronological record in graphic map form.