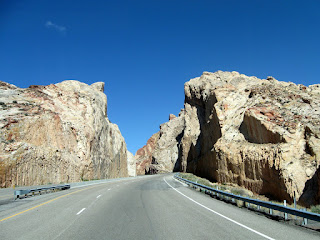 Woke to a dense cloud cover early this morning. But as I enjoyed my first cup of coffee and read the news, a stiff northerly breeze blew the clouds... somewhere to the south... which was just fine because that's the direction we're NOT going. After a light breakfast including hard boiled eggs, we had the bus-house ready to roll, toad attached, by 8:30am.

The destination today remained unknown to both of us. We had a few options and alternatives, but nothing was set in sun-baked adobe (like the Southwest reference?). We agreed to either drive until we're tired (Salt Lake City was 300 miles away -- certainly no further than that) or we'd drive until we found a place we'd like to be for a night or two.

There aren't many route choices between Moab and Salt Lake. One, the route I selected before I knew better, is US-6 between Green River (on I-70) and the southern end of the Salt Lake City Metroplex. I mean, if you look at the map, anyone with any sense of spatial cognition and knowledge of the Pythagorean Theorem would say that's the route to take... there's NO other good choice. But that turns out to be the problem with it. It IS the obvious choice... for truckers trying to cut an hour or two off the trip between I-70 and Salt Lake City... for the hoards of RVers, bikers, 4-wheelers, cyclers, and other outdoor recreational enthusiast who live in Salt Lake City and fill all the motels, hotels, RV parks, and campgrounds down in Moab every weekend... and it's the obvious choice for everyone else too.  According to an article I read, this 120 mile section of road is considered one of the most dangerous in the country. Mostly two lane road, it twists and turns, following rivers, canyons, and old railroad grades and pioneer trails... and there's little opportunity to pass in most places. Can you say "road rage" everyone? 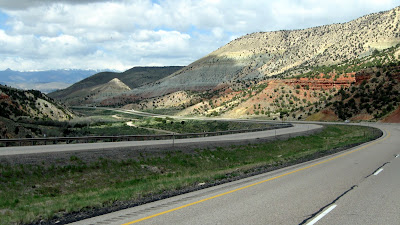 The alternative is the route we took today. Continue west on I-70, west and a little southwest, until you reach Salina, UT., where there are a few ways to connect with northbound I-15, which takes you to the Salt Lake City area. It's a little over an hour longer than the shorter route, but it was relaxed and comfortable. Besides... why do we have to be somewhere... anywhere... so fast?  Not today, at least.

The drive on I-70 turned out to be a little surprising on two counts. First, there was very little traffic.  I don't know... maybe everyone took US-6... who knows? But even better, the scenery and geography we drove through was, once again, simply stunning. Utah is right up there when it comes to gorgeous geography and stunning scenery. In our short experience, we're WOW'd almost daily.

Our first option for stopping today was the Yuba State Park Campground just off UT-29 a few miles north of Gunnison. We had talked with no one about this park... just found it while doing online research on campgrounds... and had no idea what to expect. Considering how packed everything around Moab was, especially on the weekend, we didn't think there'd be much hope here either. But as we topped a hill on the short drive into the Park, we saw the campground... and we saw only one site occupied. I even wondered for a second if it was open.  But it was, and we had our pick of pretty much any site in the joint.  Each site has a new-looking rain/sun shelter with a picnic table or two, a big fire-ring, a separate table for grills that wasn't under the shelter. The sites are very RV friendly with mostly level asphalt parking pads. The only somewhat negative thing I could say about the place is that the trees are still pretty small so there's not much shade.

We picked site 8, on a hill close to the water... the Sevier Bridge Reservoir. We drove the rig in nose first, so the lake, the snow-capped mountain, and the miles of vistas are right there out our picture-window windshield and out our dining table windows. Tonight, as the sun sets, the show should be far better than anything that might be on TV. 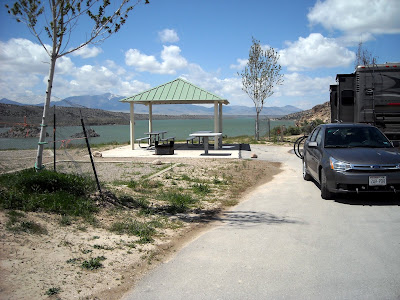 I think we might extend another day.
2012 Texas to Oregon Utah