June 25 - From Trout Creek to a Capital Fire 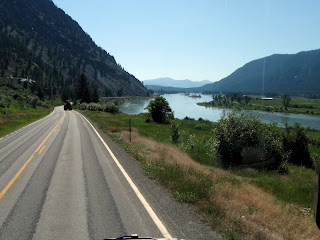 It was a slow, easy morning, this. And we didn't get rolling out of Trout Creek until just after 10am. We accomplished a lot during our short stay at this marvelous little campground/RV park... including a little laundry, a few words in, and a few more out. The bright clear morning just begged to have a motorhome running down the road splitting the scenery, and that's exactly what happened. We continued our journey eastward (for the most part) and along the Clark Fork River toward Missoula.

It's over a hundred miles to Missoula. We arrived about noon, found some reasonably priced diesel fuel (3.66), found lunch at a Montana Wheat Store, and dropped into the congested zoo known as Bretz RV, one of the big RV dealers in this part of the world. I really don't feel like carrying-on about it... but... why dealers in the RV industry find it so necessary to pack every square inch of their sales lots, their parking lots, the road outside their stores, and the gravel field across the road with, more 'for sale' RVs of every description and size and make and model than they can possible sell in 10 years... and they make customers run the gauntlet of trying to maneuver and turn and twist through the maze... just to find a few square feet of space to park the rig for a few minutes... so we could go inside and purchase a water pump at inflated prices from staff who doesn't know their liver from second base? To keep it short... I got my water pump but I won't be back, at least until they can provide some comfortable roomy parking for paying customers. Bah! This is why RVers with half a brain buy parts and accessories online. Buying from a dealer, RV or otherwise, should be a pleasure. At Bretz, it's a pain.


By the time we were ready to head out again, it was almost 2pm. I really wanted to get to Helena as the weather there looked better for the next few days than it did in Missoula. So off we went, forgoing our planned continuance on MT-200, opting instead for the faster but well worn I-90 Interstate at least as far as Garrison Junction, where US-12 heads eastward to Helena. It's only about 40 miles from the junction to Helena, but a traveler must cross over McDonald Pass (6,299') and engage the slopes on either side. To complicate matters, the State of Montana, in their effort to "chip seal" anything that even resembles asphalt pavement, was in the middle of "chip sealing" the Pass... which meant long waits in long lines while we queued up for the pilot car that would guide us poor travelers so we didn't interfere with the technical magic of laying down tar and dumping small stones on top of it. I know it has a purpose, but it's a real pain in the ass.

We arrived in Helena, a small town (pop. about 30,000) for a Capital City, and proceeded to the Walmart (only a little more than a mile from the Capitol building), where I had the mistaken notion that we might be able to tuck into a corner of their parking lot for a night for free. Well, that wasn't in the cards. The lot was packed with traffic and cars and other RVs... and I didn't even drive in. It was another unpleasant maze as far as I was concerned, and two in one day is just too much. So I found a spot to do a little research, made a few phone calls, and decided we'd stay at the one, the only, RV park in the Helena MT area that answered their phone at 4:30 in the afternoon. About 8 miles north, Lincoln Road RV Park turned out to be an acceptable spot for a couple nights, albeit a bit pricey at $38 per night. 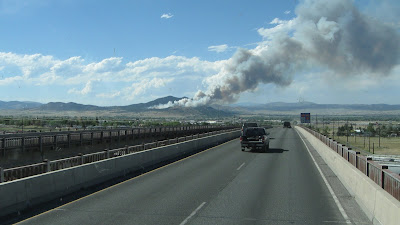 The side-story here is that while we were dropping into the Helena area from McDonald Pass, Dar noticed smoke off in the distance and wondered if it was a wild fire. When we later arrived at the RV park, we found the sun blotted out by the smoke from the fire... which happened to be two or three miles distant, growing quickly and, of course, upwind... which meant the fire was headed right for us. Talk about disappointment... can you imagine how I felt that I had just laid out $77 of our hard-earned nest egg... and we might be asked to evacuate. Well... do I get a refund???   Will I be made whole???  Where will we go??? I need to know.

Well, to make another long story short, we were out in our lawn chairs, with a big bowl of popcorn and an adult beverage, keeping an eye on the fire closing in on us... and the wind shifted.  That's right, the wind shifted... literally (and without exaggeration), within about 5 minutes...the wind changed direction... from blowing directly toward us, to blowing directly away from us. It was amazing, to say the least. We think the wind-shift probably helped the fire-fighters too.

I'll have more to say about the fire tomorrow... when we learn more from the local press. But for tonight, I think we'll sleep OK and smoke-free. 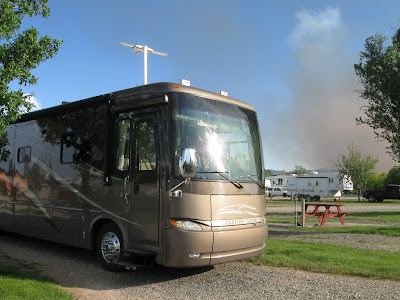