June 26 - A Hot Time in the Capital City 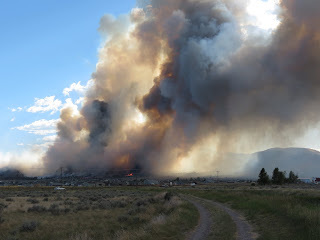 Locals here in Montana are telling us it's much warmer than normal for this time of year. And the wind has been a strange bugger too, although I can't say if that's normal or not.  As you picked up in yesterdays post, a fire got started in the hills northwest of Helena yesterday. Driven by 40+ mph winds out of the west northwest, it blackened the skies and burned more than 1400 acres before the winds died down last night and firefighters were able to get a grip on the beast. The latest reports are that 5 homes have burned and many other outbuildings as well.

This fire is very close to our RV Park... at it's nearest, it was only 1.6 miles away. We could see the flames from our camp... could see mature trees give up the fight and explode into flame from bottom to top. And, as I said last night, suddenly the wind shifted. Within just a few minutes it changed from blowing hard out of the northwest to blowing hard out of the south. I'd never seen anything like it before... an almost 180 degree change in just a few minutes. That change in direction was a good news/bad news thing for the folks fighting the fire. The change in wind started blowing the fire back over much of the area it had just consumed... so there wasn't much left to burn. But it also blew flames into an area that hadn't burned yet... and into some houses that would have been spared had the wind not shifted.

After dark we walked outside to our fire-viewing spot and saw the most amazing thing. The tall hillsides that had been burning much of the afternoon were no longer in flames, but were now, in the dark of night, covered with red-glowing hot spots... a blanket of hot cinders... like thousands of dying campfires... clearly, brightly visible from almost two miles away... just waiting to erupt again. That sight was another thing I hadn't seen before... at least not on this scale. Our visit to Helena is certainly giving us some memories.

We woke this morning to almost no wind at all. Only hints of smoke from here and there on the burnt hillsides. No giant plume of smoke either... it all could lull a spectator into complacency. Helicopters were patrolling the area and dropping water on hot spots. But it looked to be over.

As we drove into town for our Capitol visit, I noticed a few flags... hanging limp or just barely moving. There was virtually no wind.

As our Capitol visit was ending I looked out the window to the north and could see the wind and the fire had started in where it left off last night. In the time we were inside, maybe two hours, the wind started in, again, with a vengeance. Steady wind of 30 to 40 mph and gusts to more than 50. We hustled to the car and back to the RV park... just in case smoke or threat of fire meant evacuating.

Luckily, the wind was carrying the smoke slightly to the south from camp so we didn't have to deal with that. But we did batten down the hatches, pulled in a couple slides, and waited it out while rockin' and rollin' like a boat on a stormy sea.

By 7pm, the wind had backed off slightly and the fire, once again, looked like it was less mean... less threatening.

Dar has a few more photos of the fire in an online album. Check them out if you have time.

Tomorrow we're packing up and heading east again. We'll be driving out of the Rockies and onto the high plains of Eastern Montana. The weather looks OK for the next few days but I think we'll be running the generator and the A/C a little more than normal to beat the heat.

I'll be doing a separate post on our Montana State Capitol visit... may even get it up tonight. 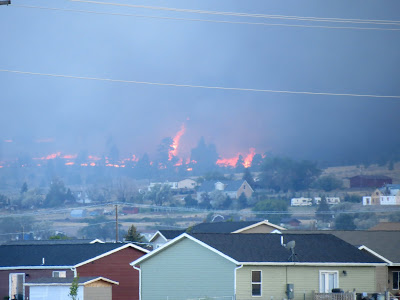 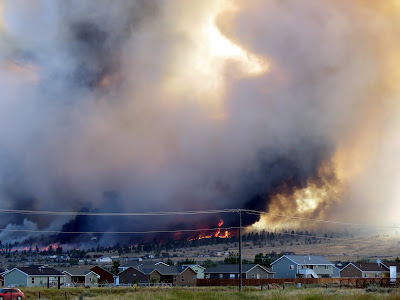