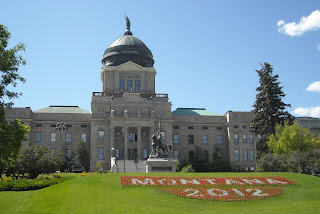 This is our 24th visit to a State Capitol Building, and I've got to say... it's beginning to feel a lot like the experience you have when looking for a new house with a real estate agent... after five or six... or ten... they all start to look alike. But we can't stop now... we're almost half way through the list of 50.

Unlike many States, this is the only building Montana ever designated as the State Capitol. Admitted to the Union in 1889, they did the right thing by initially meeting at the old territorial capitol, at hotels, at bars... wherever there was a space large enough to get a quorum and conduct the business of State. Some might feel that's the way it should have stayed, but about 1896 a group of legislators felt it was time to create a decent Capitol... a Capitol that would stand up well to the Capitols of surrounding States... a building the people of Montana could feel proud of... a central place you could go and find the bastards responsible for the issue you feel strongly about.

It was constructed between the years of 1899 and 1902. Wing extensions were added in 1910, but the building has remained basically the same since that time. A unique feature is that the chambers of both legislative bodies, the House and the Senate, are located in the same west wing of the building... haven't seen that before.

Like many other Capitols, this one was subjected to a lot of abuse during the middle part of the 20th century, when the notion of the day was to paint over those decorative details, rip out those sky-lights, jam more cheap office space into nooks and crannies here and there... all in the name of keeping it cheap and efficient. If efficiency is what we're after in a seat of government, we'd all have a State Capitol like Florida's... a high-rise office tower that reminds me of the Communist tenement apartments we found behind the iron curtain in the early 90's. It didn't work for folks living in those drab concrete towers... and it doesn't work for a seat of government. There must be elements that impart the feeling of unity... of history... of the struggle and efforts that went into achieving statehood.

Thankfully, also like many other States during the 80s and 90s, the State of Montana decided to refurbish their aging but stately relic... and to bring it back to the condition it was just after completion. There are art works that reflect the early people who had an impact on the State... the Native American... the Mountain Man... the Miner... and the Cowboy. There are sculptures of native Montanans who made significant contributions to the State.


The most significant piece of artwork we saw was the Charles M. Russell masterpiece entitled "Louis and Clark meeting the Flathead Indians at Ross' Hole". It's a massive work, stretching 25 feet by 12 feet and covers the west wall of the House of Representatives. The story goes that Charlie had to expand his cabin/studio in order to fit it in during the creation process. Standing up to the test of time, it's considered the apex of Russel's work... and it's right there in the House Chamber for all to see... and not in some one-percenter's private collection or in some obscure museum.  HoooRaaaa Montana!

After our tour, and while we were wandering, lingering, around the magnificent structure, a glance out a north-facing window revealed that the big wildfire from the day before had re-stoked... and appeared to be heading right for our camp. We decided to head back to the bus-house and forgo lunch downtown. 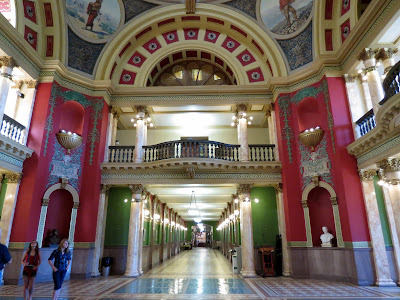 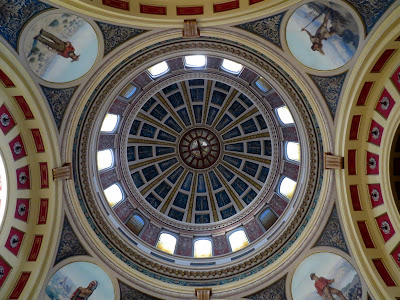 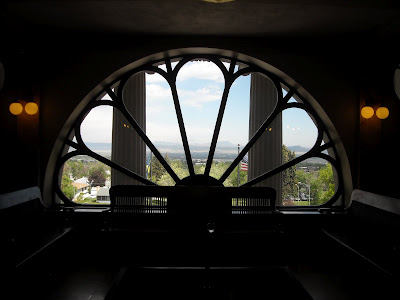