June 27 - Historic US-12 Through Montana 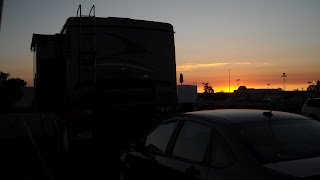 It was a big day for us... driving more than 360 miles. But that figure only begins to tell the full story of our drive today.

For the record, our route was a simple one... old US-12 from Helena eastward. For those who've forgotten, US-12 is a nearly 2,500 mile route that runs from downtown Detroit to the Pacific Ocean in the State of Washington at Aberdeen. Over the years it's been supplanted by I-90 and I-94 for much of it's length, but significant stretches of it are still ride-able and badged as US-12. 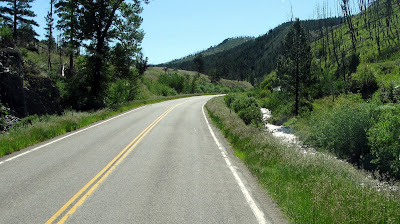 The first third, or so, of our day was positively enjoyable. Very little traffic and a fine road that took us through scenic Montana. Of particular note was a stretch through the Helena National Forest along Deep Creek... simply spectacular. It was slow-going, with twists and tight turns, but an absolute delight. We'll do that stretch again, and perhaps stay along the creek when we have our smaller rig... someday.

But near the town of Checkerboard things ground to a halt. Road construction! As we waited for the pilot car that would lead us through the next few miles of intense construction, a long (way too long) conversation with the flagger revealed they were totally rebuilding this section of road. Montana's way of doing road construction is to 1) rip up and remove the current road, 2) bring in the even bigger equipment to dig, drill, blast, load, haul, and dump material, 3) make sure the roadbed is rough, dusty, and barely passable, and 4) run traffic down through the middle of the roadbed-under-construction, one lane at a time, sharing the space with all the construction equipment. Oh, and if they need a new bridge... rip out the old bridge, build a temporary road around where the new bridge will be (off to the side, down through the creek, up the bank on the other side, and back onto the under-construction roadbed. The bus-house went places that day we thought we'd only go someday after we bought a jeep. But after about 9 miles we were back to pavement again. 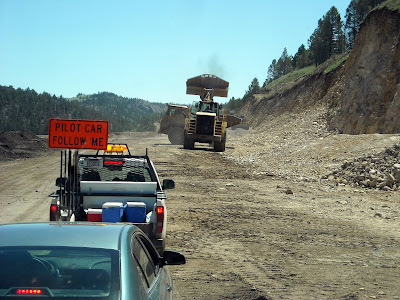 But at that point the pavement wasn't a great place to be with an almost 9 foot wide vehicle. We then understood why they're starting to rebuild this portion of roadway. You see, each lane of the very old roadway was only 9 feet wide. And there was no shoulder. Not just a very small shoulder... there was NO shoulder. At the edge of the pavement began the slope down into the ditch. In some places chunks of asphalt with the painted white line were breaking off and falling into the ditch. Now I don't mind driving down narrow roads. It focuses my mind... it directs my attention... I become a precision operator of an expensive piece of equipment that just happens to be our home and contains what little stuff we value. It's our whole shebang! That can focus a guy's attention.

What I do mind is when a large full size semi-truck, with one of those mean-looking cow-catchers welded to the front end, belching black smoke from all 4 smokestacks, pulling a load of logs or a big wide bulldozer that's probably slightly wider than it's really supposed to be... when one of these things is barreling toward me at 70 mph (the posted speed limit on secondary roads in Montana) or more... well, I do begin to mind that. Let's see, the road is 18 feet wide. I'm almost 9 feet... and more if you count those big outside rear view mirrors sticking out a little further. The truck coming my way is almost 9 feet wide, with wider rear view mirrors, not to mention the questionable width of the load. Well, 9 plus 9 is still 18... and that means there is no margin for error, no allowance for a gust of wind, and certainly it's no time for one of those drivers to sneeze, or to be texting their girlfriend on the cellphone. If you think watching the Blue Angles flying team is exciting, you should see this show.

Sometimes you get lucky and the height of the outside mirrors on the truck are higher than ours on the bus-house... in which case, one passes over the other without making contact. But if the mirrors are at the same height, each driver learns to do a quick jerky jog to the right (and back) just as the mirrors pass one another. If that doesn't work right, you might "click" mirrors. And the worst case is that the mirrors tangle and are shattered in an explosion of metal tubes, plastic, and glass. Not a good day, bunky.

I feel sure that section of roadway, something like 60 or 80 miles long (I wasn't counting... was a little preoccupied) is probably one of the more historic along the full route of US-12. I'm confident it was designed, graded, and paved in 1926... and hasn't been touched since.

I'm probably being slightly over-dramatic here and I appologize -- just having a little fun for effect, you know. To make a long story slightly shorter, we managed to get through the day with outside rear view mirrors intact and with the bus-house staying out of the ditch. But we did have to endure 3 more similar stretches of construction on US-12 today before we finally tossed out the anchor in Miles City. That's right, a new record total of 4 significant construction sites, about 30 miles of gravel roadbed, in one day. Oh, and the toad looks like it's been through the Baja 200. It was a day to remember, for sure.

One other event of note:  As we passed just to the north of Billings we could see the massive columns of smoke from a huge 10,000 acre wildfire... perhaps 10 or so miles away, it seemed like we were right on top of it. Looks like it's going to be a long fire season up this way.

Since it was getting late we opted to stay at Camp Walmart in Miles City. The parking lot was relatively level, and surprisingly uncongested by the time we got there. And despite hitting the night they sweep the parking lot at 2am, we slept pretty darned good. 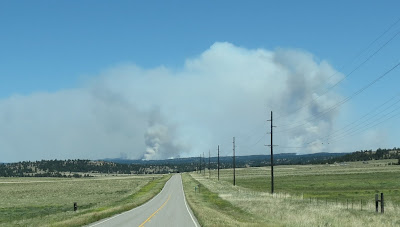