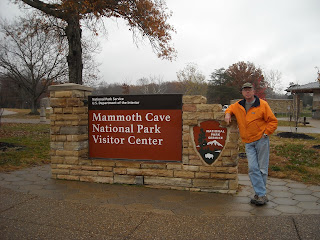 Stayed up until almost 1am last night watching Romney crash and burn. All I'm going to say about the whole affair is that if the Republicans couldn't win the Presidency this year, they have no hope of ever winning again -- at least in their current form and with their current cast of clueless characters. I just don't see any organization that includes the so-called "tea party" ever finding a way to include the increasingly important and growing numbers of Hispanics and other minorities. They're simply mutually exclusive.

Today we drove into Mammoth Cave National Park. Considering the cloudy and dreary weather, it was a perfect day to hike through caverns a few hundred feet below the surface. The Park Service recently opened a new visitor center where we stopped first to orient ourselves and learn more about the Park and it's features. Just last week they opened the new museum exhibit area which included a couple films that provided a good overview for new visitors like us.

We discovered that our annual National Parks pass expired last month. I have three months until I'm 62 and can buy the Senior Lifetime Pass for a one-time fee of $10, so it really makes no sense to buy another annual pass. While there is no entrance fee at this National Park, you are charged for each of the 6 or so guided cave tours. In exchange for $24 we got two tickets to the Historic Tour, a two hour two mile walk through the oldest part of the cave.

The Mammoth Cave system is the longest surveyed cave system in the world at almost 400 miles. And that number is growing every year as there is much more that hasn't been documented yet. That fact alone makes it worth stopping and exploring.

We've been to a handful of caves around the country... Karchner Caverns in Arizona (probably the most gorgeous and most pristine cave we've seen), Lehman Caves in Great Basin NP in Nevada, Carlsbad Caverns NP in New Mexico, and Wind Cave NP in South Dakota. In comparison, Mammoth is, well, mammoth. But it's not naturally decorated with what we've come to expect in caves... the stalactites, stalagmites, and other colorful and delicate mineral formations. It's really drab in comparison. But it's the longest... and we did enjoy being there.

After our Park visit, we drove to Bowling Green, about 30 miles south, and met some friends for dinner. In 2008 we stopped here and "mooch-docked" in Ginny and Kevin's driveway, so it was time to re-new our connection to them. We had such a good time at the Montana Grill Restaurant, our waiter probably wondered if we were planning to stay the night.
2012-2013 Winter Kentucky National Parks