May 10 - Sidney to Kearney Nebraska 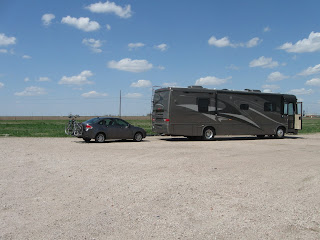 From Cabelas store to Cabelas store...  one time zone to the next... into that gray area between "The West" and "The Midwest"... we continued our eastward trek today. If we didn't officially cross into the Midwest today, we certainly will tomorrow. I've written about this before but there is a north-south demarcation between West and Midwest out here that runs from the Canadian border and into Texas. In the West you're a rancher; in the Midwest you're a farmer.  In the West you attend rodeos; in the Midwest it's tractor-pulls and county fairs. In the West you wear a cowboy hat; in the Midwest it's a seed-corn sponsored baseball cap. These days everybody drives pickup trucks, even soccer Moms who used to drive mini-vans. But in the West, you'd probably have a horse or two besides. The demarcation line wavers some and is wider in some spots than others. But it clearly runs right through the part of the country we're crossing today and tomorrow.  In Texas the line jumps to the eastern border of the state and is clearly defined. It seems everybody in Texas thinks they live in The West... even middle level bankers in Houston who have never seen a long horn steer. They live in subdivisions of little "ranchettes' and they greet you with a big "howdy" even if it comes out with an eastern accent.

Our drive was a tad over 200 miles today. The late start was due to a morning walk followed by a good breakfast at a Perkins restaurant... and the fact that I had to return the new GPS I got yesterday. After about 2 hours of use it just locked up and wouldn't respond to anything (remind you of some cherished one in your life?). I'm hoping it was a rare failure of the electronics so I just exchanged the frozen one for a new one. zippideedoodah.

Unsettled weather out this way is easing and we had mostly sunny skies today. There was one short patch where we drove through a small shower even though we could see sun all around on all sides.  Must have been one dark cloud over the top of the bus-house.

We're settled in for the night at another Cabelas store... this one in Kearney. When we hit the road again tomorrow morning we'll be pretty much off the Interstate Highway system for the rest of our trip back to Wisconsin. Destination tomorrow is the little town of Pender Nebraska.
By Thom Hoch at 5/10/2013 06:20:00 PM