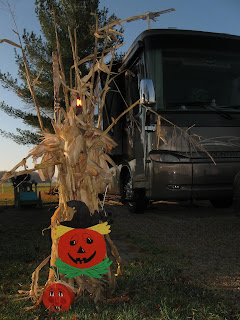 You may have noticed recent changes to the layout of this blog. Here's the quick story.

The RV Sabbatical Journal blog is now presented in a simple single column format. The focus is on the most recent post, which is where I'd like it... with little else to clutter the page. In my effort to define the blog's purpose and to feed my desire to keep it all clean and simple, I've removed that smaller right-hand column which included a bunch of things I thought I could do without or, at least, handle differently. Did anyone really care what were the most viewed posts from the previous month? Our story is best found on a separate page under the "About" tab, so the small sections called "What's This All About?" and "Synopsis" were deemed redundant and done away with. The Google search widget didn't seem to work most of the time so it too was deep-sixed.

The two elements that I felt still had some value were the previous post "Archive" function and the "Follow Us by Email" widget, which are both now in the footer at the bottom of each page... if a reader wants them, they can still find them. I've also turned "comments" back on and will simply deal with things as they come in that department.

A side benefit of moving to a simple uncluttered layout is that it's now much easier to read this blog on tablets and smaller screens. I never had success in getting the mobile version of the blog to work the way I thought it should (and the way Blogger implies it will work), and now I don't need a mobile version. Ahh, the benefits of simplicity.

Rain fell most of the day here. But we really shouldn't complain about the weather this month... it's been spectacular for the most part. The kind of October we've been hoping for. However, as we head into the last half of the month, sinking historical average temperatures and fewer hours of sunlight will slap us in the face... and we'll wake from this seasonal dream... and bask in the Winter which provides the balance that defines enjoyment. How does one appreciate the mean unless you've experienced the extremes?

Ran down to Madison this afternoon to pick up Dar at the airport. She flew to Phoenix last Thursday to join her favorite sister for a long weekend of exploring the Phoenix area as a possible retirement spot... for her sister, not Dar. While there are parts of Arizona that would be of interest to Dar and I as a home base, Phoenix ain't one of 'em. Just too many people and too much hubbub.

And we stopped in at Ale Asylum on the way home... to bolster our energy and replace essential electrolytes (lost during long periods of travel at high altitudes) with craft beer that's "Fermented in Sanity". Oh, and we had dinner there too. It's good to have my partner back.
2013 Fall Arizona Blogging Craft Beer Wisconsin
Location: Beaver Dam, WI 53916, USA