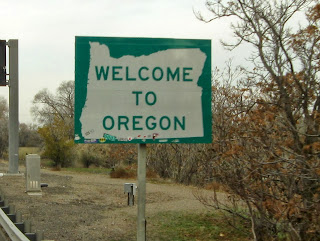 With a short 300 miles planned for today as well as a westerly time zone crossing we fooled around this morning and did not get an early start. We did however get the circus on the road some time after 9am. After loading up a tank of fuel it was back on I-84 westbound, through Boise, across the Snake River (again) and into the high desert of eastern Oregon. More and more it was beginning to feel good... familiar... like a welcoming home territory... a place I know like the back of my hand, yet, perhaps, really don't know at all. That's right, this is Oregon. And right over there, across the big River Columbia, that's Washington. This is the land we called home for about 8 years in the 80s and 90s... the place we raised our kids, explored, beaches and mountains and high desert. We visited places like Crater Lake, I climbed to the top of Mounts Hood and Helens, let the kids run free at the coast, taught them to ski on the mountains, poked our noses in here and there. But if there's anything we've learned in the past 6 years of our "sabbatical", is that we've only scratched the surface. It was the Cliffs Notes version, the survey course. And now we desire to experience more of it in depth, do the graduate level version. Why? Just cuz. We're really hoping the little camper, once it gets here, is as up to the task as we are.

Weather today was good when we started but deteriorated some as we moved into Oregon. A "disturbance" was predicted to bring a 40% chance of rain, but the whole thing was to diminish as the day wore on. At least "in theory" it was a 40% chance, but "in reality" it turned into a 100 percent chance... something that never happens to me when sitting at a blackjack table in Vegas. Between La Grande and Pendleton the wipers were clearing a light rain all the way.

We landed in Boardman Oregon, at the Boardman Marina and RV Park. We're hard on the banks of the Columbia and enjoyed a sunset light show during a "happy hour" walk up the shore.

It's good to be home. 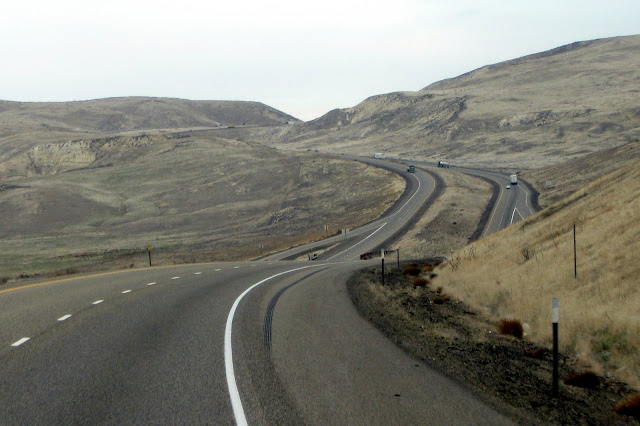 We're going to Quartzite, and California for about six weeks then we are coming back to Oregon and Washington to just explore... no reason just beacuse we can. :)
Welcome back to Oregon

Oh that brings back memories of the 5 years I worked in Richland Washington and explored along 84. That is nice country much of the year.