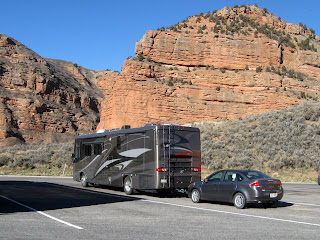 Got down to 25f degrees last night which means the furnace got a workout, as did the batteries that power it. But we managed and got a good nights sleep. The early setting sun this time of year has me thinking about bed (and sleep) at ridiculously early hours... especially when we're in boondocking mode. I can fight the urge for a while but eventually surrender when bed becomes the warmest and most comfortable spot in the house. As a result I'm sleeping, sometimes, by 8 or 8:30. Of course, that means I'll be awake early... turning up the heat... making coffee. But when our goal is to "get there", that's not all bad either. For the most part, we've been able to manage.

The other two times we've been through this way we left I-80 and took US-30, the old Oregon Trail route, up passed Kemmerer, Montpelier, and Soda Springs... and then up to Pocatello before catching the Snake River for the trip downhill to Portland. For something different today we stayed on I-80 and were treated to a spectacular drive through a couple historic canyons. It was new territory for us.

The route of the first Transcontinental Railroad is the route of today's I-80. It was the most logical path for heavy rail traffic to traverse the mountains between the flats of SE Wyoming and the Great Salt Lake Basin... some 3,000 feet lower. The upper portion is called Echo Canyon which ends in an abrupt split about half way down the mountain. At that point, I-80 goes left and down into Salt Lake City, and I-84 goes right and down into the Ogden area. The first Transcontinental Railroad took a right turn toward Ogden, and so did we.

This lower canyon is Weber Canyon (I think). In spots, it's barely wide enough to contain the river, two lanes of Interstate Highway, a narrow local road, and two rail lines. It didn't seem like the whole canyon floor was more than a couple hundred feet wide.

The morning sunlight perfectly lit the canyon walls and produced dramatic shadows that enhanced things even more. It's a small section of roadway that we'll always remember.

Once down to the Ogden area it was back to the humdrum of Interstate travel. But we both felt as if we're entering a new phase in our trip. Crossing into Idaho and getting to the Snake River meant literally that we've arrived in the Pacific Northwest. The Rockies and the high country were behind us. In a small (very small) way, we felt a sense of what those early emigrants must have felt when they made it to this point.

We arrived at our destination, Mountain Home Idaho, mid-afternoon. Miles today (and I'm not fudging anything here), was 400. In four days we racked up 1,676 miles and only have about 500 to go... which we'll break into two days.

We're parked at the Mountain Home RV Park. It's a modern and nicely cared for place operated by some of the nicest workampers we've run across. We've been here once before and thought it'd be a great spot to take a break. We booked two nights and plan on sleeping in tomorrow. There'll be a few chores, a trip to the grocery store, but mostly it'll be a day to vegetate.