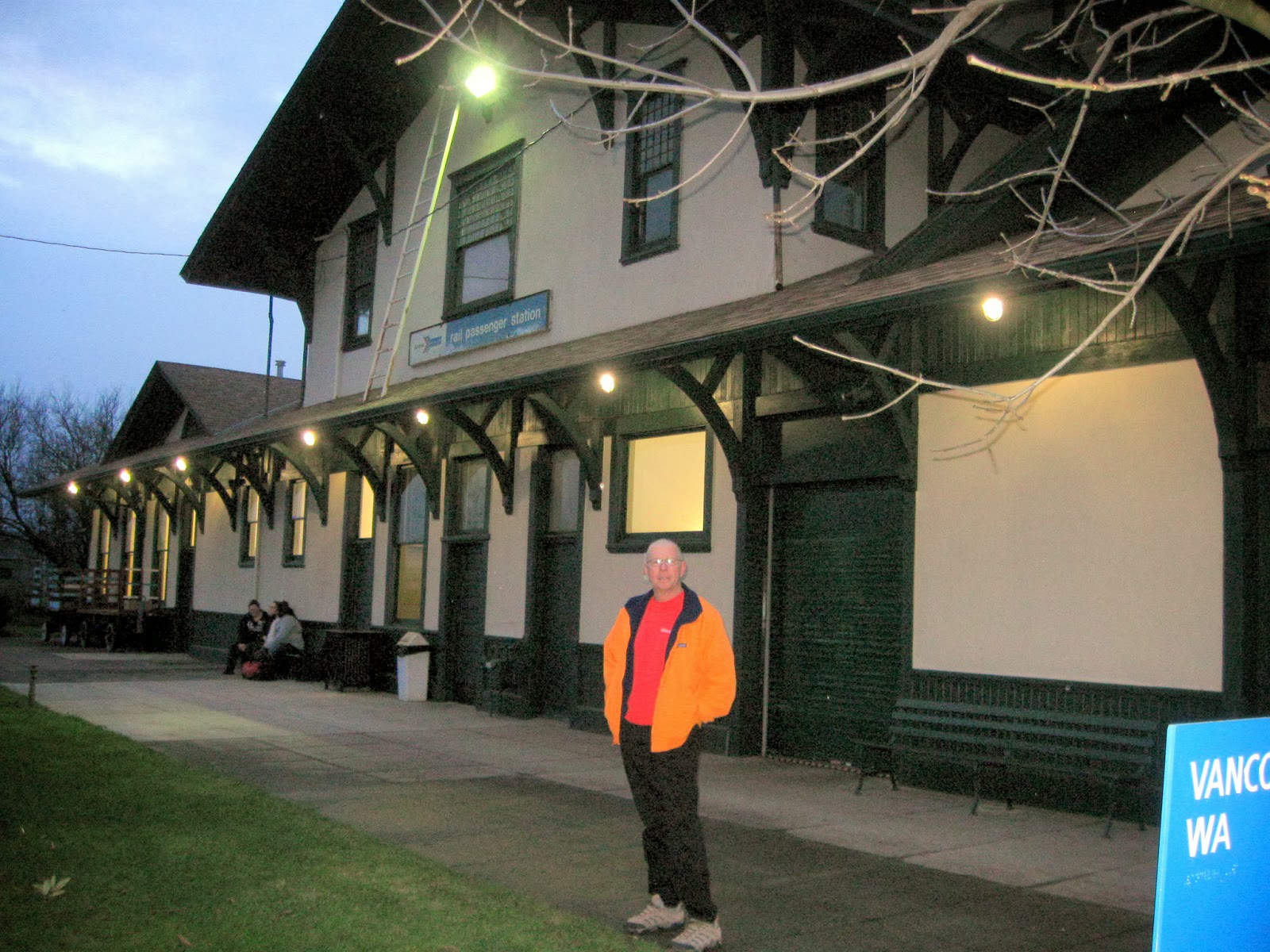 A few minutes after 5pm we boarded Amtrak's Empire Builder at the Vancouver WA station. I've mentioned before that this is a handy boarding spot for us, being only 10 miles or so from Gage and Andrea's house in Camas. Andi and Evan saw us off.

The train is made up of one Amtrak engine, a baggage car, an observation/club car, two regular coach cars, and a sleeper car bringing up the tail end. All except the baggage car are "Superliner" two level cars. The Empire Builder is unique in this regard: between Chicago and Spokane it's a single longer train. In Spokane it splits, with half going to Seattle and the other half going to Portland. The process for eastbound travel is the reverse, and our small train will rejoin it's Seattle half later tonight. From there we'll be at "full strength" for the rest of the trip.

9pm PST Sunday. Our route follows the Columbia River, on the Washington side. During summer it's still light this time of night which would make this leg of the trip up the Gorge a real visual treat. We, on the other hand, didn't see much more than the lights of towns and highways and big dams. But our overall impression so far is favorable. And we're really looking forward to the rest of the trip. So far, at least, the condition of the rails is good. The ride is reasonably smooth.

We just arrived in Pasco WA after having gone through the Wallula Gap on the Columbia. We've driven this section on the Oregon side a number of times during the past 6 years. The Gap is a natural rock narrowing which caused large ice dams at the end of the last ice age. Repeatedly, a huge lake would form behind the ice dam, covering most of Eastern Washington and parts of Idaho and Montana. When the lake grew in size to a point at which the dam couldn't hold it all any longer, it all broke loose and the resulting huge rush of water is a big part of the natural forces that formed the Gorge.

10pm PST Sunday. Our roomette is small but since we'd gotten a good deal on it we thought we'd give it a go. Overall charge for the one way trip is $670 for both of us. Standard coach seating would have been about $400. The roomette includes meals, linens, towels, etc., which makes the $270 additional a pretty good deal.

After leaving Pasco our sleeper car attendant made up our bunks. During the day we have two seats that face each other between a large window. At night, the seats convert to the lower bunk and a second bunk pops down from the ceiling. Getting ready for bed was a bit of a chore this first night. When the bunks are down there's not much room to maneuver. Eventually we are settled and getting into the rhythm of the rocking train... the rhythmic clicking of steel wheels on steel rails... bumpy grade crossings... Of course our speed varies, but we've often seen 70mph and on the best sections, as high as 80mph. As we speed along the hills of eastern Washington, sleep comes easily.
By Thom Hoch at 1/12/2014 09:00:00 PM
Newer Post Older Post Home