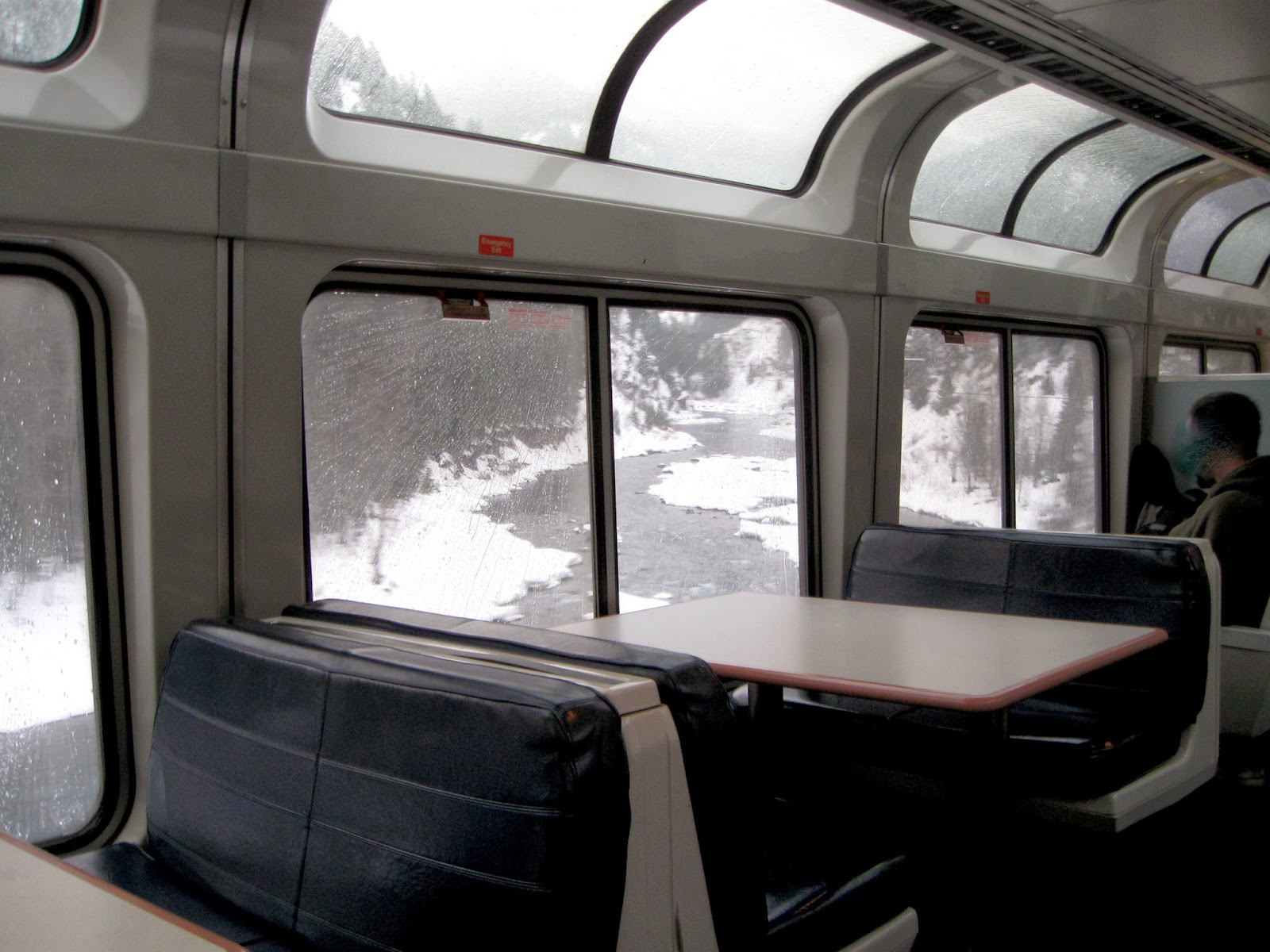 3AM PST Monday. Woke to a bright light just outside my window. And no movement... clearly we were stopped... somewhere. The light is a street light, one of several used to light up a parking lot immediately next to the tracks. No one around. All is quiet. Timetable says we were supposed to leave Spokane (after connecting with the Seattle part of the train) at 1:30am, an hour and a half ago. Further investigation and clarity of head reveals we're still in Spokane. No word on why we're delayed. About 3:30AM we start moving. Back to sleep.

8AM MST Monday. East of Libby MT. We're on the rail line pioneered by the old Northern Pacific which through the mid-section of the country came to be known as the "high line". Much of the route follows US-2, but through this area of Montana, between Libby and Whitefish, the two separate. Train passengers are treated to scenery motorists on the highway won't see. There's a 7 mile long tunnel through some hills out here... one of the longest train tunnels in the US. Before Whitefish we trace the west shore of Whitefish Lake. Saw a Bald Eagle snagging breakfast.

11am MST Monday. Near Glacier. Everywhere a thick blanket of snow atop roofs... laid-up over the winter like dozens of this flaky layers of pastry. After West Glacier our route circles around the southern end of Glacier National Park. Even though its cloudy and a mixture of snow and rain is falling at times, the scenery is tremendous.

12Noon MST Monday. We've been "holding" just southeast of Essex MT (Izaak Walton Inn) for freight traffic and high winds on the mountain. Dar and I have found a table in the Observation car which means I have an audience, most of whom don't appreciate my prediction that the winds will die down by Thursday. Groans.

1pm MST Monday. Started moving again a little after Noon and started the 1300 foot climb to Marias Pass and the Continental Divide. Definitely more wind and blowing snow up here. Wintry for sure. A little east of East Glacier we crossed a large trestle spanning a canyon. Shortly later stopped for freight traffic for a few minutes. At this point, we're about 3 hours behind schedule.

The rest of Monday afternoon was uneventful as we plodded across Montana. Not much scenery to enjoy, although I like the plains (big sky, you know) almost as much as I like mountains. Just different, not necessarily better one way or the other.

Had dinner in the diner car... sat with two gentlemen who work in the Williston Oil Fields. They're stationed at a facility that disposes of by-product liquids from various drilling and fracking processes. It gets pumped into the ground... I think I heard right that it goes into retired oil wells. Anyway, they live in a 5th wheel trailer and one or the other is on duty 24 hours a day for three weeks. The they get a week off. There's a substantial number of oil field workers on this train... heading back to work after their days off. We'll notice a decline in the number of passengers after Williston.

Were ready for bed but still watching the passing countryside when we reached Williston. Shortly thereafter the rocking, clacking train brought sleep to both of us.
2014 Amtrak to Wisconsin 2014 PNW Spring Pause Amtrak