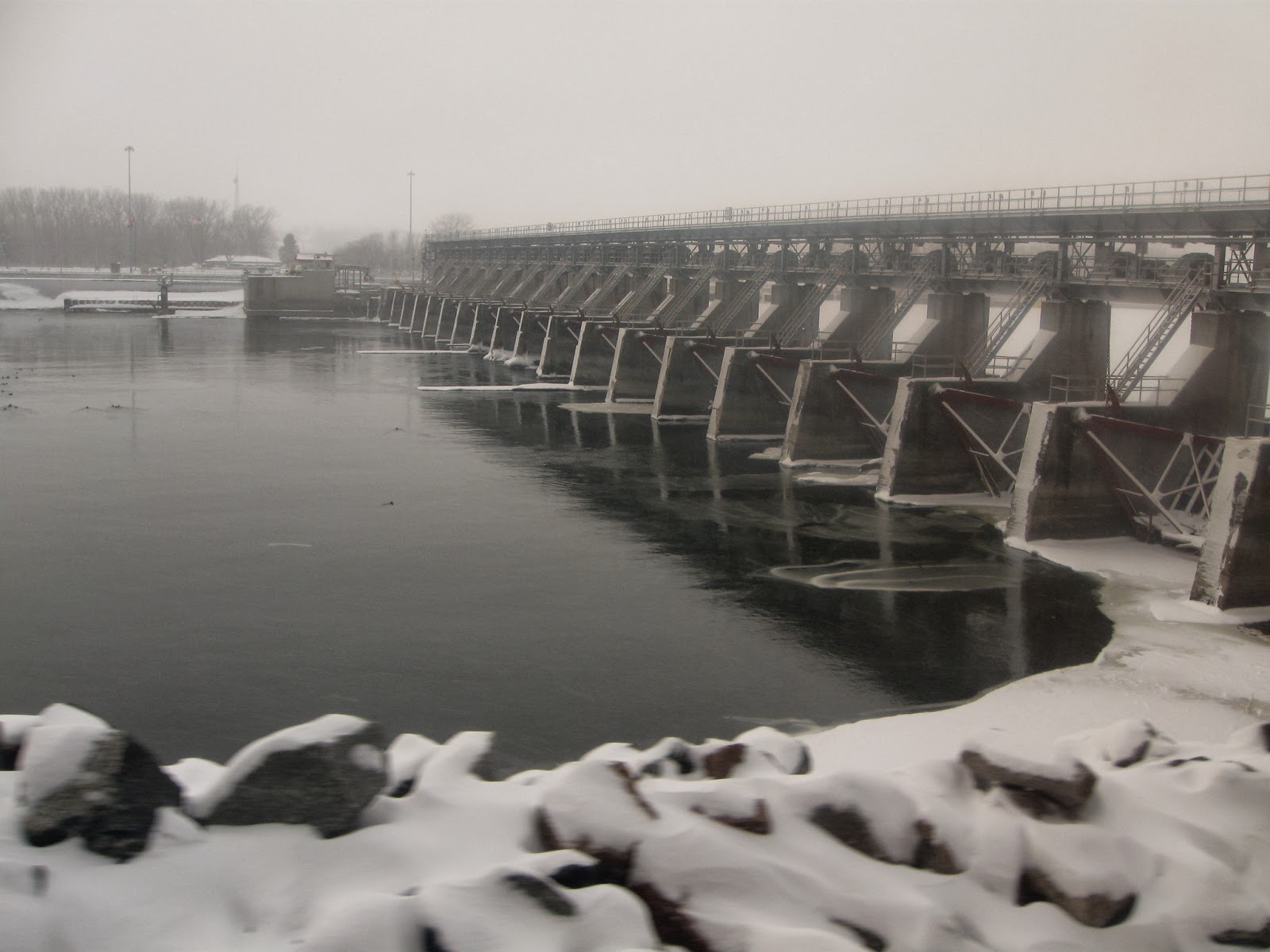 I was awake early, still dark, when we made the bend southward from the Grand Forks area down to Fargo, where we bent eastward again. Don't know why but the passing landscape is much like watching a campfire... not many surprises, but you've just gotta watch.

Don't think we would have eaten in the diner car if our meals weren't included in the price of the roomette. It's not cheap and the quality was not the best. I'm sure they make liberal use of the microwave oven. Also read some place that they utilize "sous vie" cooking style... a means of bringing food to temp slowly, and keeping it at serving temp for long periods of time, with controlled hot water. Hmmm.

After Fargo we rolled and clacked our way southeastward toward the Twin Cities. Through here we were now almost 5 hours behind schedule. A crew member said we almost always make up time between here and Chicago. Hope so. Don't want Cal and Marion to be out after dark... even if it's just 12 miles or so to Columbus. Saw predictions of snow for today in Wisconsin.

Getting to St. Paul was easy. Getting to the station in St. Paul was a little more involved as we waited for quite some time before pulling in. Thought we'd get a breath of fresh air so jumped off the train to soak it in. Jeez it was cold; single digits if I remember right. Through a snowball or two and clambered back aboard. Certainly not dressed for those temps. The day was sunny but everyone seemed to be clearing the snow that fell the night before.

Then it was through downtown St. Paul, along the east bank of the Mississippi to where we cross over to the west bank just above Red Wing. Lake City, Winona... and then cross again at La Crosse. Hey, we're in Wisconsin.

Things were rocking and rolling pretty good until we got into Fort McCoy. The time we'd made up eroded away again when we came to an abrupt stop just prior to Tunnel City. You see, the town of Tunnel City is named from an old railroad tunnel that's still in use today. And because there's only one set of tracks going through the tunnel, trains must wait if there's traffic going the other way. I'm not sure why we had to wait as long as we did; seems we could have gotten through the tunnel without affecting the opposing freight train. As it was we had to wait 45 minutes?.. an hour?.. before the lumbering old Soo Line train clawed its way through and past us. Now we were back to about 5 hours late again.

The remaining hours saw daylight give way to evening. Snow was indeed falling and the wind was blowing hard. Communication with the parental pickup team was steady. It was completely night when we neared Columbus... about 6pm. Had a near panic situation as we packed and readied for disembarking. Couldn't find ?? Dar's cell phone. She felt sure she had it the observation car when we spent some time there but can't remember seeing it when we had lunch in the diner or since. A neighbor suggest calling it and I did. Turns out it was buried in a nook in our roomette. Wasn't sure we'd have time to do a proper search before we had to get off. All turned out ok.

The train is too long for the Columbus station platform. So they utilize what they call a two-stop solution. The train comes to a stop with the front half alongside the platform; people get off and get on. Then they pull ahead and repeat the stop for the last half. We were in the last half... indeed in the last car on the train then entire way. As it was we still had to trudge through snow to find Cal and Marion and get all bags and ourselves into the truck for the ride back to the farm.

Those 12 miles were a little tense with icy and snow covered roads, slow single-file traffic, wind driven snow (almost blizzard white out conditions at times), and a dark night. But we did make it home and were happy to be there.

Thoughts about the train.
First, glad we did it. As one of my bucket-list items but also actually enjoyed the two day trip. We were on the train a tad over 48 hours, which is much faster than driving it at a reasonable pace. The price, at $670 for the two of us, including the roomette and meals, could be lower than driving it as well... depending on fuel economy and use of motel rooms along the way.

Doing it again, I'd certainly recommend a roomette. Standard coach seating is comfortable, but not as good for sleeping as I'd imagined; the seats don't recline far enough and the footrest is not large enough to support a taller person's legs. Then there's the issue of leaving your stuff at your seat while you go to the observation car, the diner, or just to walk around. It's probably a smaller issue in reality but one that would gnaw at me if I had my bag-o-electronics left behind at my seat. Thirdly, in coach you're stuck with the people around you. I observed people talking loudly to traveling buddies across the aisle, portable speakers playing music (not my kind of music either), the socialite who talks someones, any one's, ear off. Generally, the noisy coach cars were a big contrast to the very quiet, library-like, atmosphere of the sleeper car. I'd do it again for this reason alone.
2014 Amtrak to Wisconsin 2014 PNW Spring Pause Amtrak