First Days on the Alaska Highway

on June 21, 2015
The Alaska Highway, the "Alcan" as it's also known, was built in 8 months during 1942. Those were tense days. Pearl Harbor had been attacked the previous December and there was great fear of Japan invading North America... first the Aleutian Islands (just 700 miles from Japan), and then, after they gained a foothold in Alaska, who knows? It was imperative to have a land route to Alaska for military mobilization as soon as possible. Ten thousand army engineers were hurridly rushed to various spots along the proposed route, along with equipment and supplies, and given orders to punch through a military grade road before the winter of 42-43. They did it. All 1500 miles of it... stretching from Dawson Creek BC to Delta Junction AK. It wasn't the prettiest road, as a matter of fact it was pretty damn ugly in spots. But they did it. The building of this road through forest, swampy bogs, mountains, and frozen tundra still stands as one of the great engineering accomplishments of all time.

Since that time, the road has been almost continually upgraded. It's been straightened, re-aligned, and improved. All the original bridges across streams and rivers... just timber bridges built with the trees and materials at hand... were replaced. In some places you can see, and often drive on, the original road which closely follows the alignment of the current upgraded highway. We visited the Kiskatinaw bridge, the last remaining wooden bridge on the Alcan. It was built by a private contractor in 1943, replacing the crude original structure. The unique thing about this bridge is the 9 degree curve from one end to the other of it's more than 500 foot length. No longer on the alignment of the current Alaska Highway, it's a valued artifact from more than 70 years ago... and a monument of engineering in a pre-computer age. Wonderful.

Left Dawson Creek full of excitement and anticipation. But for the first couple hours today... until we got some distance north of Fort St. John... I was, frankly, disappointed. My expectations were one thing, reality was another. There is so much resource extraction in this part of Canada, the resultant truck traffic and general hubbub, busy-ness, was overwhelming to me. Huge oil transporters, larger oil field equipment haulers, logging trucks, and rock, gravel, sand hauling trucks were everywhere. There were far more of them than RVs and travelers heading north. My romantic expectation of the road leaving Dawson Creek and punching immediately into a wildlife filled wilderness was clearly unrealistic. But that's why I'm here... to experience the "real McCoy", the genuine article. To see for myself what this Alaska experience is actually all about. Isn't that what travel is all about anyway? I got over my disappointment.

We've been keeping careful watch for wildlife. Haven't seen much yet. Our big coup for the drive today was a bear... our first black bear. Spotted alongside the highway in the Profit River area. Don't think we'll keep a scorecard on wildlife sightings or we'll go nuts.

Stayed tonight at Tetsa River Regional Park... 25 of the prettiest rustic riverside campsites you'd ever want to see. We snagged a site and paid our $20C. Sounds of nearby flowing water will assure a good nights sleep tonight.

Made it north of 58 degrees latitude today... the latitude with an attitude. By some folk's standards, this is the line where the "far north" begins.

The road is generally in very good shape. Like roads everywhere, there are some spots where it might be considered "fair" or "poor", but for the mostpart the quality of the road surface is better than some interstate highways we've been on in the good old USA.

Fuel: As I mentioned in an earlier post, 1.149 per liter seemed common up to and including Dawson Creek. That price calculates to the equivalent of about $3.50 per US dollar considering the favorable exchange rate. But the further north one travels, the higher the price. We paid 1.429 in Fort Nelson this afternoon. It's common to find diesel for a few cents less than regular gas.

The drive through the northern Canadian Rockies today rivaled the "Banff to Jasper" route for scenery and visual wow-ness. Much of the road through here is narrow and twisting... more like my pre-conceived notion of what the Alaska Highway "should" look like. But it won't be that way much longer as projects are underway to straighten, level, and widen the road to a much higher standard. If you're looking for that authentic experience before heading up this way, I wouldn't wait much longer.

Saw a couple more bear today... just busily munching away on something alongside the road. Also slowed for a group of bison that were likewise more interested in eating than in traffic just a few feet away.

Again, I can't begin to convey the beauty of these mountains and the path through them. I'll include a selection of photos with this post for you to see some of what we experienced today. As always, there are more photos in our online photo albums. They're only a click away from the tab at the top of this website.

Because we prefer staying at more rustic provincial parks, internet access is hard to come by. I'm trying to keep the journal up to date by writing offline and will "publish" when I find WIFI.

We stopped and snagged a campsite in the Liard River Hot Springs Provincial Park. One of the "must do's" along the Alcan is a stop at the Liard Hot Springs for a soak, and having the hot springs just a short walk from our campsite is quite convenient. The weather today took a turn for the better. It was actually over 70 degrees with a bright clear sky. Couldn't have planned a better day for a stress relieving soak.

And up to this point we're not having any problems sleeping during these very short nights. Even in Dawson Creek, the sun didn't set until almost 10pm and was poking up again by just after 4am. Considering we're just a day or two away from solstice, and our planned route to take us north of the Arctic Circle, this is just training for much brighter nights to come.

Before retiring tonight we decided to extend our stay here another night. Another day of warm sun, soaking in the hot springs, and enjoying another non-travel day couldn't hurt, could it? We have no set schedule so when we find a comfortable spot, we'll often "call an audible", and linger a while longer.

Good weather day that made our day of rest even more enjoyable. Another soak in the springs was in order and then the rest of the day to relax, read, and work on things. Ordered up wood for another campfire, our second in as many days.

The sun's direct rays on earth reached their furthest annual northern point today, and areas above the Arctic Circle are experiencing 24 hours of daylight. We're not there yet, but in the next week or so, that's our plan: to be in the land of all day sunlight.

About 8am this morning we left our campsite at Liard River Hot Springs Prov. Park, and headed northwest, toward Alaska. However, we only rolled about 4 tenths of a mile before a force beyond our control reached out, grabbed the steering wheel, and turned the truck into the Hot Springs Lodge, where we enjoyed a much needed hot breakfast.

Only 130 miles today but still saw a good collection of wildlife: a couple bears and a bunch of bison were most noteable. Our goal was to make it to Watson Lake where we checked into the Downtown RV Park. We're not going to make RV parks a habit, but in some cases, like today, there's a reason. In this case the reason involves "washing"... the truck and camper, some laundry, and ourselves, a hot shower.

Watson Lake is the location of the famous Alaska Highway Sign Post Forest. The whole thing started when some homesick GI made a sign with the name of his hometown and it's distance from Watson Lake. Since that time more than 75,000 signs (at last count in 2013) have been put up on a literal forest of signposts that cover the better part of a block. Just goes to show you can overdo a good thing.

Here are a few pics from these days.  The rest are in our photo albums... [here] 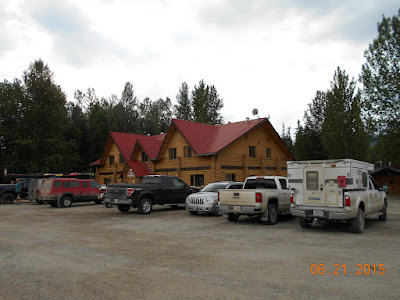 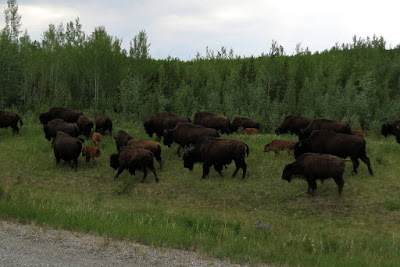 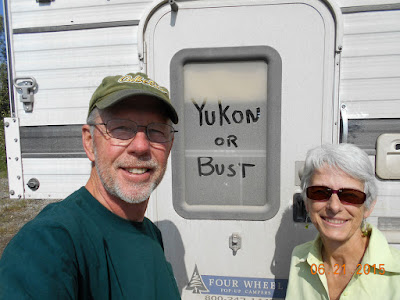 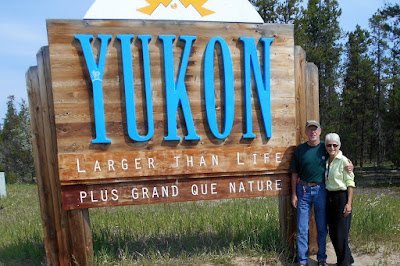 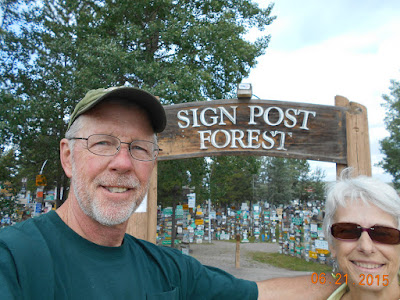