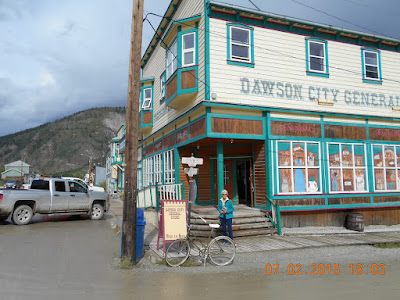 After almost a week of dusty (and sometimes muddy) gravel roads and exploring the far north we're settled in Dawson City for a few days. Everything needed a good scrubbing... truck, camper, laundry, ourselves.

And being this far south is taking some adjustment too. It actually sorta' gets kinda dark at night. Not really dark, more like dusk, but the sun does in fact set for a couple hours. Neither Dar nor I had any trouble sleeping during the bright nights up north. But this darkness thing is a little disconcerting. And there's that nagging innate worry that if the sun sets it may not rise again the next morning.

During our stay in Dawson City we toured this historic place. Popping up almost overnight after gold was found in a nearby creek, it quickly soared to a population of more than 20,000. After the boom/bust experiences with other earlier gold rushes, most folks thought this was going to be a "flash in the pan" too. So little thought was given to permanence when constructing buildings and making improvements. It was a rough place too with men outnumbering women by a wide margin. Plenty of money was spent on sprees in town, whiskey, gambling, and girls.

As years went on and it became obvious that there indeed was a lot of gold around here and mining was going to be a long-term thing, the town became more civilized. Wives and families joined their prospector husbands, bringing a pacifying element to the raw town. The government established a post office and other official offices to serve the locals. More businesses sprang up selling some of the "finer things in life". And the brothels were relocated to the other side of the river.

It's still a somewhat raw town. With the exception of Front Street, the main street along the riverfront, the streets are all unpaved. Graded and maintained only occasionally, potholes are ubiquitous. And when it rains, they turn into muddy messes. Sidewalks are boardwalks that require some attention as one perambulates around town because they're uneven and inconsistent, with some broken boards here and there to help you maintain your focus. This, I thought, was the way all towns got started... especially towns in the midwest during the mid-1800s when our little Beaver Dam was established. Dirt streets, wood sidewalks, dust, mud... I enjoyed the momentary space-time shift back to those early days of our hometown.

From an aesthetics standpoint, in Dawson City one gets used to dirty cars, trucks, and campers. And in some cases we're not just talking dirt, we're talking goo encrusted, layer on layer, of brown caked on and dried mud. Most of the vehicles here have just come off the Top of the World Highway, which is gravel and dirt, or the Dempster, which is gravel and dirt. If neither of those two apply, a few hours driving around Dawson City on dirt streets will usually accomplish the job too. The effect is multiplied by a factor or 3 or 4 if it rains. But after a day or two, one doesn't even notice these things anymore.

We had surprisingly good meals at a few of the local eating establishments. With tourist-grabbing names like Klondike Kates, Sourdough Joes, etc., they serve up decent food but the prices are definitely as high in dollars as the Yukon is in latitude. Expect about twice what you'd probably pay for a similar meal in the USA. Two beers, a fish sandwich, and a plate of fish and chips, including tip, was $65C at Sourdough Joes. A hamburger, a turkey sandwich, and two beers at Klondike Kates went for $48C.

But one doesn't travel to the far north for the great deals on restaurant food. No sir... no madam... we come here for the experience, to try to grasp a small fleeting flash of history and the formative times in this part of the world.

Then there's tourism with a capital T. Apparently Holland America Cruise Lines offers side-trip excursions from their ships to Dawson City. There are a couple large modern hotels that cater to this bunch, and large tour buses are a common hazard. The town is becoming more touristy as time goes along. 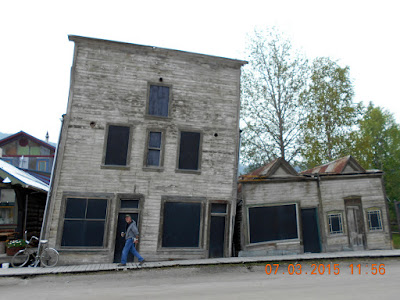 The Yukon Government also has a big stake in Dawson City. Their Parks department owns some 40 historic structures in Dawson City, has some in heavy restoration and some in a more natural condition, usually sinking like a torpedoed victory ship due to the underlying permafrost. We did a hour and a half walking tour with a very knowledgeable and entertaining guide who added to our understanding of history and our Dawson City experience.

Much to my chagrin, we went to Diamond Tooth Gerties one night, to see the can-can stage show. Dar was the spark-plug on this deal. Falling under the category of Tourist Trap, it's a combination casino, bar, restaurant, theater. A cover charge gets you an admittance ticket that works all summer. (Hmmm Wonder if we should get back here on our way out of Alaska to take advantage of free admittance to Diamond Tooth Gerties... hmmm?) Of note... 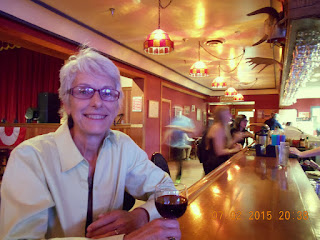 Dar won $20 bucks at the roulette table, nearly winning back the cover charge we paid to get in. She used the tried and true "one roll and out" method of gambling favored by those who don't want to prolong the painful process of losing. You take your entire night's kitty (in this case, $20C), and put the entire thing on either red or black at the roulette table. One spin and you walk away with either nothing or double your bet. It's about as close as you can get to a 50/50 chance in a casino. In this case, she picked red and red it was. She walked away. For the night, she was up 100%. Not many can say that.

Dawson City was built on a small swampy 160 acre plain alongside a bend in the Yukon River just downstream from the confluence with the Klondike River. During the gold rush, the river was really the only way in or out of town. Hundreds of riverboats plied the river taking people downriver toward Eagle, Forty Mile, or upriver to Mayo or Whitehorse. Floods were common. Eventually a levy was constructed to keep the river under some control. There was a footbridge that connected the two sides of the Yukon in those days, but today the only way across is on a free ferry operated by the Yukon Government. One must take the ferry across to access the Top of the World Highway and the Yukon River Government Campground.

For the record, our first two nights here we stayed at the Dawson City Gas, Tire, Convenience Store, RV Park, and Campground (!!!) on the edge of town, to take advantage of the coin-op laundry, showers, and pressure washer (for the truck/camper). Our second two nights we were at the much more agreeable government campground across the river.

I'm writing this on July 4th. The plan is to head west on the Top of the World Highway tomorrow. 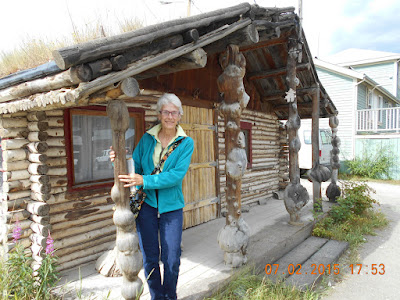 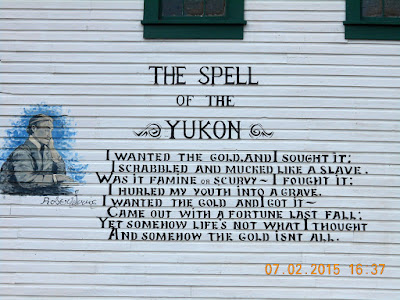