Seward Washout; Next the Kenai 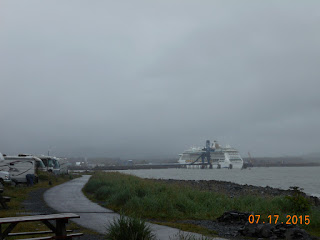 That did it. We’re not going to sit here for two more days of rain. That’s one reason we have wheels under our home away from home. We can move if we choose to. And that’s what we decided. Between rain squalls and wind blasts, we got the camper together and closed up, and we took off looking for sun.

A peek outside revealed a monster cruise ship, Radiance of the Seas, had pulled in overnight. It’s such a large ship it makes the small town of Seward appear even smaller. Some folks say that cruise ships have ruined these towns. Others like the economic activity… people spending their money right here in little Seward. I’m not sure who’s right… can see both sides of the issue. But when a ship comes to a town of 3000 residents, the sudden influx of 2000 more people makes an impact. But they come… and they go. It’s very intermittent economic activity at best.

We did not give Seward a fair shot this time. The weather prevented our usual mixing, mingling, and exploring that we’d usually do. But we’ll be back.

As we drove north on the Seward Hwy, and then pivoted west on the Sterling Hwy, the weather did improve. Before we made Soldotna there were even a few blue patches in the sky between the clouds. And it wasn’t raining.

Soldotna and it’s twin city Kenai make up the largest concentration of population on the Kenai Peninsula. They even have a Walmart and a Northwest favorite Fred Meyer Store. Since we needed a few provisions we thought we’d stop quick at Fred Meyer. OMG… WTF… (shock and awe!), the parking lot was packed to overflowing. The store was full of people. Even the restrooms in the store had waiting lines. What’s going on? 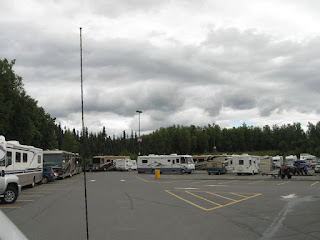 Two things, maybe three. First, it’s tourist season. And what does every tourist hear about Alaska from people who have been here before? “You’ve got to see the Kenai. It’s just amazing. Scenery and fishing like you’ve never seen before.” So they all, every visitor to the 49th state, eventually comes here to see what the big deal is. I think most of them came this weekend.

Second, it’s salmon season. The salmon are running and the salmon fishers are running after them. People up here go crazy during the salmon run… a little like “buck fever” back home during deer season. The roads are full of people with crazed looks on their faces, pulling big boats with big motors, and big campers loaded with big fishing gear… and they’re driving fast, like they might miss the big one if they don’t hurry. They don’t know why they’re here but, like the salmon their after, they always return to the same stream they were hatched on.

And the third thing adding to the congestion may well be the weekend. That’s right, it’s Friday. And there are plenty of locals who are afflicted with salmon-fever too. They pour down here every Friday, they don’t know why, to stand in the same stream they were hatched on. You just gotta love Alaska.

Not feeling the good positive vibes in Soldotna, we continued south until we found a little state campground named Ninilchik View CG. Just a dozen or so spaces, only a couple were occupied as we drove through. What? Just a few miles back we drove through another state campground that was completely full. So why the difference? The “full” campground was right on a salmon stream. The Ninilchik View CG is high on a bluff above the shore of Cook Inlet… not so many fishing opportunities here. Additionally, it’s not very “big rig” friendly. The spaces are level and nicely separated, but not very long. We took a space for the night.

Across the inlet, in the haze as the sun sets, are three volcanoes still considered active: Iliamna to the southwest, Redoubt straight out, and Spurr to the northwest. Just remember IRS. 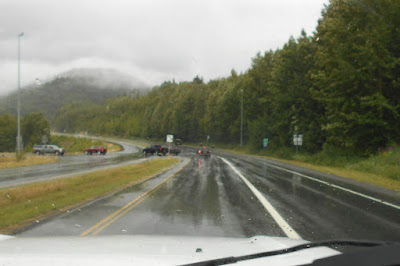 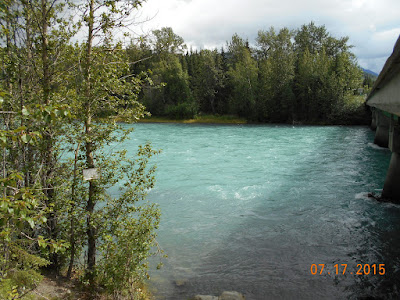 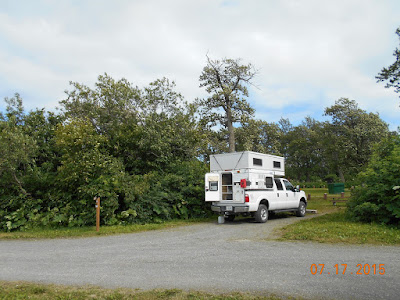 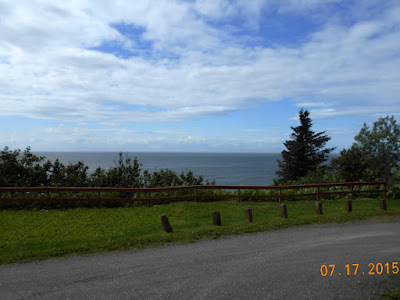