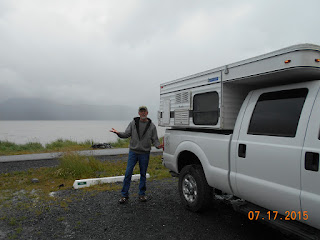 Rain. Rained all night. Rained all morning. Rained all afternoon. I believe this is the first period of extended and steady rainfall since we began this trip. We… I… could deal with it better if I had an internet connection.

Since arriving in Alaska I’ve been disappointed by our ability to hook up to the internet with our Verizon MIFI device. Only in Valdez did we have good service. I don’t, and didn’t, expect we’d have universal service up here. Just consider the huge amount of space, the mountains. Just too much geography for anyone to cover. But if a town as small as Valdez has service wouldn’t you expect the bustling town of Seward would too? After a half-hour call with Verizon yesterday, we’re still sitting here with nothing. I’m suspecting my plan is partly to blame by not allowing roaming to other data networks. But it did work in Valdez… a good strong 4G signal. I don’t know and being pandered by the tech rep who didn’t seem to know any more about the MIFI device than I did certainly didn’t clarify the situation. Enough on that subject.

We’re still parked at the edge of Resurrection Bay in Seward. It’s a very nice spot. With the sky being generally cloudy the past day or so, I had to fire up the generator this morning to give the batteries a little boost. Usually a couple hours of run-time will be sufficient.

Today is the 40th day of our trip. As we pause and look back at where we’ve been, what we’ve done, what we’ve done is amazing. So many life-long memories (which for us really isn’t all that long ;-). We’re probably not quite to the halfway point of our trek around the far north, but here’s a thought on our experience so far.

I’ve become an even greater fan of going small… as small as you can… for an exploration rig. Who says you can’t make a tiny camper like ours work for months at a crack. We ran into one couple who are getting close to 2 years fulltime in their little camper. Like anything having to do with RVs or campers, it’s compromises all around. Sure, there are times a little more space would be nice… like today, days with steady rain for example. But sacrificing some space for nimbleness and the ability to go anywhere, pull off anywhere, without concern about having the space to turn around or even jut to park. Sure, we see big RVs all the time… bouncing up the frost-heaved roads… straining to keep the tires off the shoulder on narrow roads. But having driven our 40 foot diesel pusher over 50,000 miles in varied and sometimes extreme road conditions, I think I’m enjoying this trip far more than if we’d brought the motorhome.

When it stops precipitating, we're planning to drive out to Exit Glacier, the one spot in all the Kenai Fjords National Park it’s possible to get a truck (car… camper… etc.) into the Park. Over half of the Park’s almost 700,000 acres is blanketed by the Harding Ice Field. A relic from the last ice age, it conceals most of a mountain range under ice several thousand feet thick. It’s the largest ice field in North America. Sliding off this cover of ice are numerous glaciers. Rivers of moving ice sliding down steep mountain valleys, and carving them even deeper as they go, glaciers terminate where they melt and break away. They are fed from the snow and ice above (input) and melt away where they terminate (output). As long as the input is greater than the output, the glacier advances... grows in size and extent. If the output is greater than the input, the glacier retreats. In this part of Alaska most glaciers are in retreat, but there are some that are advancing.

Later in the afternoon:
Yes, still raining. Sure hope the parts of the state ablaze with more than 300 wildfires is getting some of this.
2015 Alaska Alaska