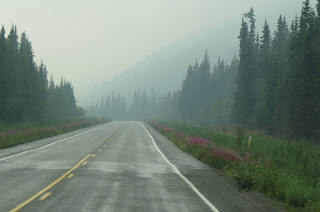 It rained overnight. The sound of rain hitting a camper roof, as long as it's not too heavy, can be one more factor that makes for the epic sleeps we've been experiencing (fresh air whisping through the trees is another). We de-camped and headed south on the Tok Cutoff. Still raining lightly, there was also a haze of smoke in the air that obscured visibility. A little disappointed by our luck we still enjoyed the slow drive through scenic country... at least what we could see of it.

But about 30 miles out things started to clear. At least the smoke was mostly gone. Still, clouds above and a few drips... but under the clouds one could see for dozens of miles. And then the clouds showed signs of breaking up too. Our spirits brightened with the sky.

On this route we drive through the Alaska Range of mountains. I don't know what or how or why soaring mountain scenes do what it seems to do to people, but there's something going on beyond simple pretty pictures. It's almost like we lead our lives in two mundane dimensions most of the time, and being in the presence of soaring mountains adds a third dimension that we don't often experience. (The flip-side of "You don't know what you've got till it's gone...") It's also awe at the power of nature, and a tiny sense of the immensity of time... (a fourth dimension).

During our travels we're trying to visit every one of the "big" full-fledged National Parks. I believe there are 59 of them. Today, we added Wrangell-St. Elias National Park to the list of visited Parks. (I'll get back to you with the current count when I can find my list.)

While this is the largest Park in the system, it's one of the least visited. There are only two roads into the interior. Today we drove Nabesna Road... all 40 miles of it... an out and back road through a valley between the Mentasta Mountains and the Wrangell Mountains. Like many areas in Alaska, there was some mining activity down here years ago.

After a few miles of pavement the Nabesna Road becomes a two vehicle wide gravel road, then a one and a half vehicle wide gravel road of lesser quality, then narrower yet. There are a number of places a vehicle must ford a stream... not deep today with the lack of rain and snow this year. Since the ranger said the stream must be "forded", not sure what we would have done if we'd had a Chev or Dodge.

This is truely back-country Alaska. We're camped tonight in a lakeside pull-out at about the mid-point on our way back out. As I write this there's a moose making noise and feeding on whatever moose eat along the shore of the lake. A bear wandering by tonight is a very real possibility too.

Oh... almost forgot... at the end of the road this afternoon, we found the Devil's Mountain Lodge, a back-country lodge that caters to hunters, fishermen, and adventure seekers. They have their own private landing strip and a few planes to take those so inclined to even more remote spots in the surrounding mountains and valleys. The Ellis family that owns and runs the operation, and has since the 1950s, was very friendly and warm. This might be the spark for a future adventure. 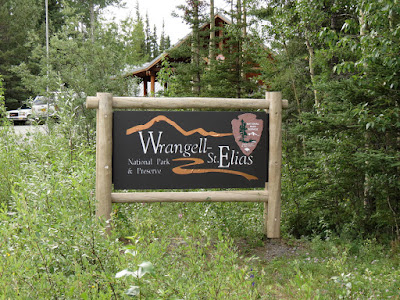 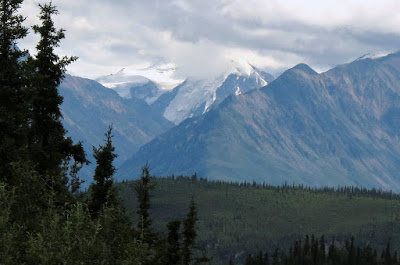 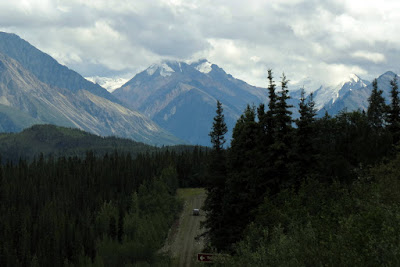