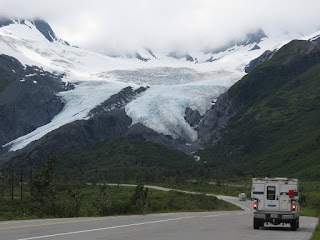 Decamped and left our small roadside camp off Nebesna Road, and headed out of Wrangell - St. Elias National Park after a quick breakfast. We were alone with moose and squirrel, along with a bunch of other wildlife. At this hour of the morning, except for the very rare car or truck, this is a very secluded spot. Certainly no people around.

Stopped at the visitor center in Slana again. They were particularly helpful the day before, so Dar wanted to thank them and fill them in on our experience. In the category of “small world”, it turns out the woman at the desk is a relative of the Ellis Family who runs Devil’s Mountain Lodge at the end of Nabesna Road -- who we met yesterday. It seems most Alaskans are quite willing and happy to bring the passing visitor into their realm. Very friendly bunch.

Underway again, we tootled southward on the Tok Cutoff portion of the Glenn Highway until we got to Glennallen, where we refueled both the truck and ourselves. Then it’s south on the Richardson Highway toward Valdez.

During the day we experienced varied road conditions… everything from glass-smooth new asphalt to “rock and roll” roads like we’ve seen nowhere else. For a few stretches it was more entertaining watching big RVs deal with these frost-heaves (or whatever caused them) than it was looking at the spectacular scenery. (OK, with some effort one could do both.) And by just staying behind a group of them we could toodle along at 30 or 40 mph, enjoy the scenery, and not feel like we were the cause of the traffic jam.

Closer to Valdez the road comes out of a valley and begins winding around and through the stunning Chugach Mountains that sit atop (to the north of) the coastline of Prince William Sound like a crown. According to some folks, these mountains are why Zurich Switzerland and the surrounding Alps are called the Valdez of Europe. While other mountains are perhaps taller or more massive, the Chugach Mountains are spectacular in their closeness and steepness. They’re not “over there” or on the horizon. They’re literally right here, right next to the road. The enshrouded high alpine valleys above are filled with ice fields and moving glaciers, the result of huge amounts of snow that fall most winters. This time of the year the melting ice causes cascades and waterfalls… which are all over the place. Not a few dozen, but hundreds… maybe thousands of them… flowing down the sides of steep peaks… silvery stripes… everywhere one looks. I don’t have the words to adequately describe it. 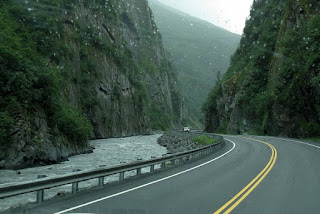 The only way by car or truck into Valdez is over Thompson Pass. It’s elevation, at just under 2700 feet sounds low but it is above treeline at these latitudes. During our passage conditions up there were kinda ugly… wind, rain, very cold, when just a half hour or so later, in Valdez, it was partly sunny, much warmer, and milder breezes. In Winter, Thompson Pass has a reputation as a very dangerous pass. It’s the snowiest pass in North America with as much as a thousand inches of snow in one season. Of course not all winters produce that much snow, but the average snowfall is between 20 and 30 feet. Hmmm… might have something to do with all the glaciers and ice around here.

We found an agreeable campsite just outside town and very close to the Valdez Glacier, before taking a quick orientation tour of the town. There’s a lot more to be said about Valdez, but in a future post. 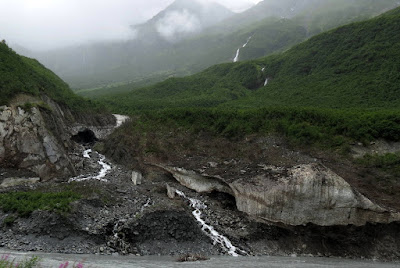 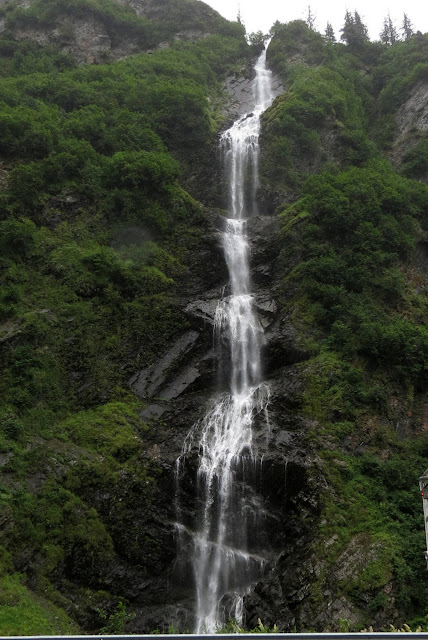 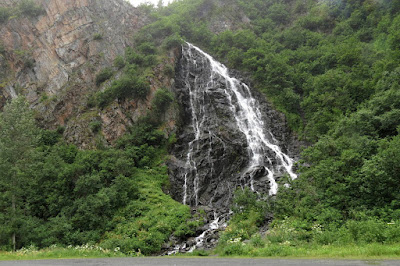 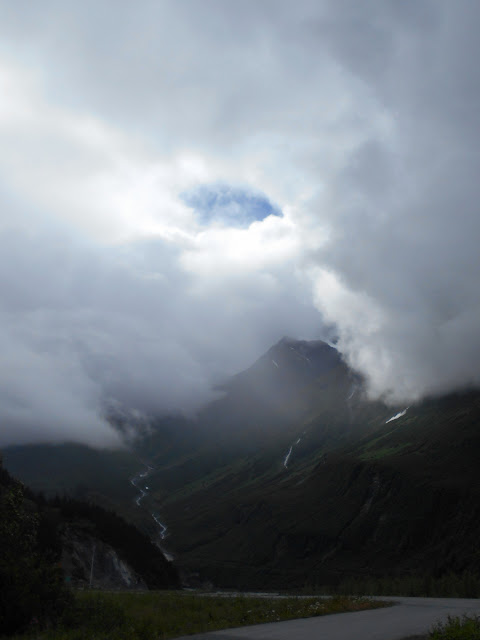 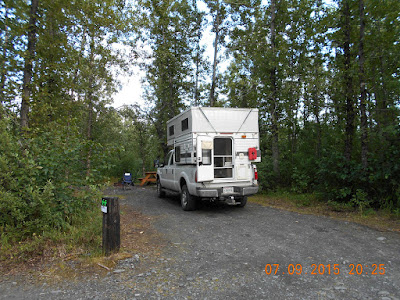