Breathing life back into the old blog, we’ll make an attempt here to bring it up to date before the end of the year. Let’s see… when we last heard from anybody at Dar and Thom’s RV Sabbatical Journal the new garage at the farm was just getting started. And my eyes (both of ‘em) were healing from cataract surgery. 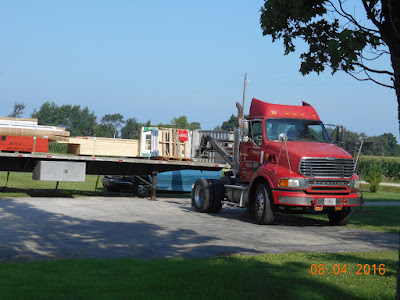 But there was a garage to be built. There’s no doubt things started getting a bit more frantic as all the materials for the garage were delivered in early August. Piles of materials… wood, shingles, trusses, garage door parts, windows, sheathing and siding, and much much more… were scattered around the yard in strategic locations to make access easier and yet leave room for working and maneuvering. Rain predicted for later in the delivery day made the first effort one of getting it all protected from water damage. 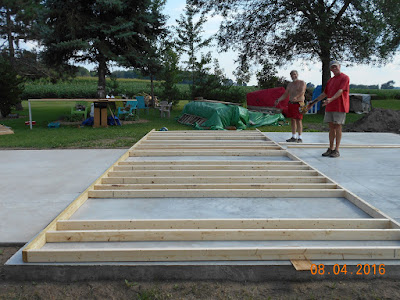 The following day we were on the slab and nailing walls together. During the week, the core of the crew was Dar’s brother Dennis, Dar, and me. On weekends and a few scattered days here and there we had a larger crew who wanted to be part of this good old fashioned barn raisin’. That first weekend we had access to a handy hunk of equipment, a large construction fork lift owned by a neighbor, that made short work of setting trusses and lifting plywood and shingles onto the roof. Without it, the work would have progressed much more slowly and been accompanied by twisted joints, sore muscles, and mental anguish. As it was, the structure rose quickly and was covered within a week. 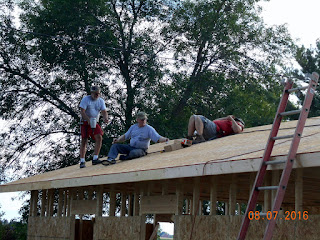 Dennis is the lead guy on this job. It’s his property and he has the most carpentry experience among the rag-tag group of helpers. He’s knowledgeable but he doesn’t have a lot of time for gold-bricks, slackers, or retired guys who think their hard working days are behind them. Unfortunately, I’m all three of these things. His motto is: if the sun’s shining he wants to hear nails being driven, wood being cut, and progress being made. Seven days per week, 12 or more hours per day. There will be no breaks until it’s built. We had an incredible period of sunny weather and I couldn’t find a rainy day anywhere to save me.

Dar's Mom, Marion, was a key member of the crew too. She supplied the food and refreshments to keep the crew moving so the job would be done before the snow flies. 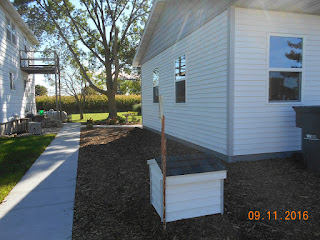 After about three weeks the pace did slow down somewhat. The building was almost weather tight and work evolved to puttering with problems, internal stuff like wiring and trim, and landscaping around the outside. My last job was a small “well house” built from scraps and in the style of the garage itself.

Our summer evaporated as the calendar turned to September. Time to head back west again. We left September 11.

Here are a few photos of the various crew members. And, of course, there are more pics in our online photo album.