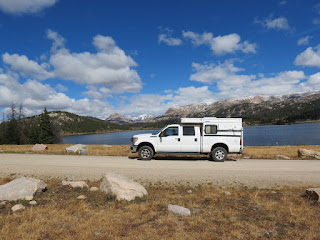 Between September 11 and September 27 we traveled between Wisconsin and Oregon. For those unfamiliar with our travel and living pattern, we consider Wisconsin our summer homebase, and Oregon is becoming our rest-of-the-year homebase. So for the past few years we’ve worn a pretty good path between the Midwest and the Northwest. It’s the journey, not the destination, that we focus on… so we look for new routes between here and there. And, as shunpikers, we prefer trading Interstate highways for more sedate state and county roads.

The general route for the first part of the trip this year, oh, roughly between Wisconsin and Montana, is to follow US-12. We did depart from this plan at times, but that was the basic path. The back-half of the trip was still unplanned, except for my desire to do the Beartooth Highway again.

In Wisconsin on sideroads and backroads, we followed WI-33 up and through the Kickapoo River Valley in Western Wisconsin. Stopped for lunch in Wonewoc where we found the local Lions Club had big grills set up on Main Street and were offering lunch as a fund raiser. Think I had an entire half chicken with all the fixin’s… way more than I should have eaten. In Cashton, we got involved in a parade of some sort that slowed our progress. Then, just outside of Cashton, found our road to LaCrosse was closed due to some construction, and the detour was long. Crossed the Mississippi between LaCrosse and LaCrescent, and then up to our old neighborhood in Burnsville MN. where we overnighted at the home of good friend Jim.


Highlights of the drive through Minnesota and South Dakota included seeing the worlds largest ball of twine and an incongruous petrified wood sculpture park in Lemmon SD. Strange as it seems folks flock in huge numbers to Yellowstone and the Grand Canyon but, for some reason, don’t bother with peculiarities like twine balls and wood turned into stone. Hard to explain. We later found out we inadvertently drove right by the world’s largest hairball in Webster SD. Dang.

Between Miles City and Billings in Montanta we stopped again at Pompey’s Pillar, a must-see if you’re a history buff and a fan of the Lewis and Clark Corps of Discovery. We’ve been here before but we have found repeats can be as enriching the second (or third) time. The significance of a place can be more firmly embedded in your mind with repetition. And there are some of us who just forget. An excellent ranger-guided walkabout and discussion made this stop notable.

During this trip west I estimate we were on Interstate Highways for just 350 miles (out of 2500 or so). A big chunk of that was between Miles City and Billings… about 150 miles. I can’t stress the pleasure of getting off Interstates enough. Just so much more rewarding and relaxing. 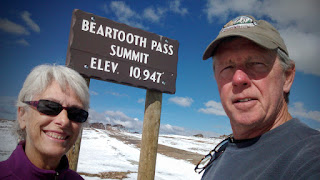 Just outside Billings we picked up US-212. The Beartooth Highway and Beartooth Pass is between Red Lodge MT and Cooke City MT… one of the most spectacular drives in the USA. We stayed at a campground near Red Lodge for two reasons: first, to give Red Lodge Ales brewpub a second chance after our less-than-agreeable stop the last time we were here. And second, to position ourselves for a morning start on the Beartooth… with the sun on our backs. For the record, Red Lodge Ales redeemed themselves in our book.

The next morning we headed “up the hill”. And we lucked out with just about the most perfect day to do it. I’m serious when I say it’s almost impossible to adequately describe that drive on a perfect day. It’s just got to be experienced.

US-212 dumps travelers into Yellowstone NP at the northeast entrance. We were merely transiting through the park in order to meet up with good friends Doug and Kay near West Yellowstone. Shocked at the number of visitors still in the Park this late in September, and the traffic was snarled continually as we moved from one wildlife sighting blockage to the next. Took hours to get through to the west entrance and West Yellowstone. One 12 mile long section alone took an hour. Laid low for the next two nights enjoying good weather and the company of friends.

Then up to Bozeman for a quick dinner with professor Bill at MSU. US-191 runs between West Yellowstone and Bozeman, following the Gallatin River. I’ve written about this before, but we have a special place along this road we like to visit each time. It’s a gravel pull-off between the road and river where we stopped for breakfast, just the two of us, before kids, way back in 1974. The memory is of sitting on top a large rock in the river, munching a bowl of cherios. Somewhere we have some pics from that stop, but haven’t found them yet. That rock out in the river is really, for us, a monument to our relationship and we just have to stop by every once in a while. Ya know?


After Bozeman we point the nose westward again. In keeping with our shunpiking theme, we took some backroads and sideroads through Wise River, Wisdom, stopping at Big Hole National Battlefield, the location of a sad tragic battle between the US Army and the Nez Perce Indians as they were attempting to relocate to Canada during the brief Nez Perce War. Very moving and puts a different perspective on history. Just west of the battlefield, up Joseph Creek, we crossed Chief Joseph Pass, and eventually down the Bitteroot Valley to Missoula. Stayed in a motel that night, our only motel of the trip.

From Missoula followed the Clark Fork River to Sandpoint and Ponderay in the Idaho panhandle. Stayed at a favorite campground on the lake... Riley Creek COE.  We were both feeling a tad poorly the past couple days and denial wasn’t making it any better. Our original plan to see the kids in Washington on our way to homebase Sutherlin was scrapped and we headed south from here. Don’t want to show up and infect the grandkids… not the kind of thing good grandparents should do. Right?

So, after two nights at Riley Creek, we altered course to the south, through Lewiston and Clarkson to WA-129 south -- Rattlesnake Highway. We’d not heard about this road before… really just stumbled on it. But what a find. I’ll let the pictures do the describing. One doesn’t want to be in a hurry on this road, nor would I advise texting while driving. Briefly, it’s a canyon cut by Rattlesnake Creek, with a road stuck on the side of the canyon walls.


We’re back in Oregon again. Enterprise, Wallowa, Minam, and LaGrande. After another short chunk of Interstate, Starkey, Ukiah, Long Creek, and Mt. Vernon. Stayed two nights at Clyde Holliday State Park, soaking up sun and feelin’ good.  We did spend one more night out, at Crane Prairie Lake down in the Cascade Lakes area southwest of Bend. A fitting last night out, with great views of Mt. Bachelor, Broken Top, and the Three Sisters… all while watching a group of mule deer playing, socializing, lunching… right along the lakeshore in front of our campsite.  The following morning we wrapped up our trip by crossing the Cascades on OR-138, having lunch at the Steamboat Inn, and following the North Umpqua river home.

16 nights, about 2600 miles, some familiar things, some new. Perhaps a little faster than we’d ideally prefer. But it’s good to be home. 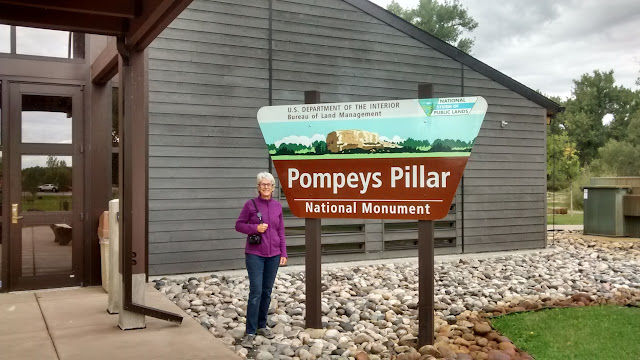