A Table for the Ages

A new picture.  The table was originally built by Dar's Dad, and was with us when our kids were growing up. Dar had them each paint whatever they wanted on a portion of the top. Now it's grandkids time... Andrea's boys have made their mark on one bench and now Justin's two have done their part on the other. So two generations of memories.

Unfortunately, the table has spent too much time in the elements and is deteriorating to dust. Entropy in action. Photographs will preserve the memories even if the table is no longer with us. 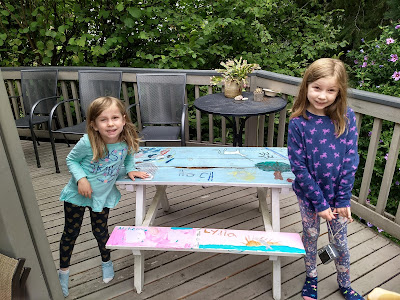