Yesterday, Monday, we got an early start and drove to Bryce Canyon National Park. It's only about 80 miles from our camp in Zion so we thought we'd take a day and do the Bryce Canyon 101 overview. The weather was perfect, traffic was light, and the little Ford Focus performed flawlessly, reporting 41 mpg at the end of the day.

Bryce Canyon is only about a fourth the size of Zion -- and Zion isn't large compared to the big parks like Yellowstone, Grand Canyon, or Glacier. Bryce is at a higher elevation than Zion, with much of the park over 8,000 feet. At Zion, visitors are at the bottom of the canyon looking up; at Bryce, you're at the top looking down. And what you're looking at is something you just don't see everyday. 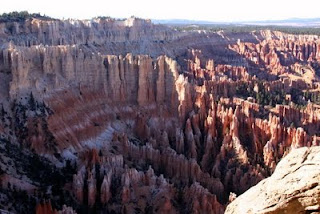 In pre-historic times this whole area was the bottom of a shallow sea. The sediments that built up on the bottom of that sea, which were subsequently uplifted by tectonic activity deep within the earth, now make up the layers of rock and sandstone that lie beneath and around Bryce. These layers of rock are very soft and easily eroded. Water easily "melts" the material away, leaving delicate structures called "hoodoos" that can be as much as 200 feet high. This erosion activity is still taking place and this is considered one of the most rapidly changing landscapes on earth. 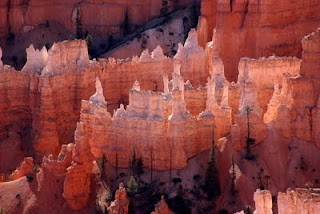 The textbook definition of "canyon" is a land form that's cut by a central stream. The land form at Bryce is not, strictly speaking, a canyon as there is no central stream responsible for the erosion. Instead, rain and melting snow at Bryce stay in the basin and create what's called an "amphitheater". The area we explored during our short visit yesterday is called Bryce Amphitheater, which is 12 miles long, 3 miles wide, and 800 feet deep. It's the largest of a series of amphitheaters in the park. 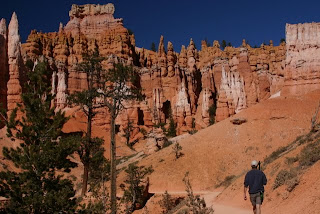 With a little imagination, it's easy to see figures or faces in the hoodoos. They can look like cartoon characters, or gnomes, or your Uncle Charlie. There's a myriad of colors in the rock -- it looks like an artist's palette or a paint factory explosion. Once again, I'm going to have to defer to the photos we took to give you an idea of the place.

After a visitor center orientation, we decided to do a three mile hike that took us down to the bottom of the amphitheater and right down among the hoodoos -- about 600 vertical feet down and another 600 feet back up. We took two cameras and snapped almost 500 pictures (which will keep Dar busy at the computer for days!). 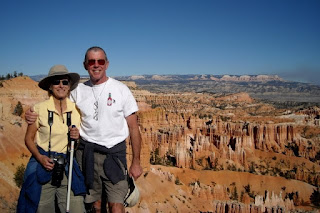 The experience is stunningly awesome, not just from the colors or the scale of the dramatic land forms and structures, but from an appreciation of the amount of time it must have taken to create this place. Nature is incredibly powerful and adaptable. The things we've seen during our explorations that past few weeks have been here long before humans evolved and will be here long after humans are gone.