Yesterday we joined Zion camp host Mike Fousie and new friends Julianne and Jimmy on an exploration of some caves here in the Park. I won't reveal the location of the caves because the park is trying to protect the sites from vandalism by keeping traffic to a minimum. You'll understand why in a minute.

After a short hike and a degree of scrambling up loose rock and sand we found the first cave, a rather shallow affair that certainly offered early peoples a degree of protection from the elements. At first glance, I really didn't see the pictographs that we went there to see. But then, I found one... no, a group of them... and then more. It's like your eyes have to adjust to "antiquity mode", and then you start to see them. 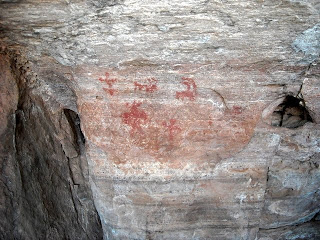 These ancient figures are pictographs -- paintings, as opposed to petroglyphs, which are etched or carved into the rock itself. The people who made these paintings are thought to have been hunter-gathers who lived in the Zion area about 2,600 years ago, possibly longer. Now referred to as the Virgin Anasazi, the western-most Puebloan group, they lived along the banks of the Virgin River in small settlements and primitive cliff-dwellings. They survived in this simple manner for almost 2,000 years before drought and a shortage of resources made them move further to the Southwest. 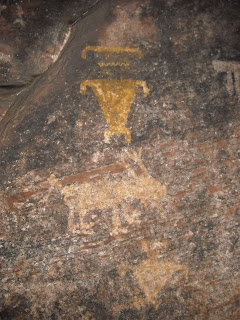 The pictographs are simple, often representations of people, animals, or spirits. There was one large figure that may be a shaman -- a religious person that acted as a middle-man between the real and spiritual worlds. 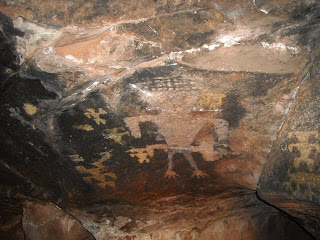 Some distance further we found another cave, and after some time, found a few more pictographs and a bunch of animal bones that are apparently dragged into the cave by scavengers where they can enjoy their meal in the luxury of some shade.

I thoroughly enjoy seeing evidence of early peoples. I wonder what they were thinking as they drew these figures. Were they done by select artists of the day, holy people, or just ancient teenage pranksters -- the ancestors of the modern day people who paint the colorful and ornate graffiti on the sides of railroad boxcars? Hmmm.

After our day of exploring we gathered at Zion Park Lodge --  drinks and some light fare for parched and hungry explorers.  Then, back at camp, we all enjoyed another blazing fire, talked about our day, and experimented with variations of the ever popular s'mores, which we all agreed are better without the graham cracker.

Today, Wednesday, we're planning nothing and getting ready for departure tomorrow.