After an efficient morning... no lingering or lazy wafting around the internet world... we headed west for our day in Lincoln. The drive was quick as NE-2 is a great four lane slab of concrete the entire distance of 45 miles. As the miles were ticking by I glanced off to the south side of the road and saw a small body of water... a creek or perhaps a pond... and there, sticking out of the water, was the Loch Ness Monster. Don't ask me to explain more, I can't. Apparently someone's idea of entertainment out here on the great plains. And no picture... it happened too quick to get a snapshot.

It's been many years since I've been to Lincoln. It was on the circuit of towns I'd occasionally hit during an early chapter of my business days. But I really don't remember much from those visits. The metro area has a population of about 300,000, a nice size, and generally appears neat and cared for. One thing we did notice while driving around town was the large number of city parks, many of which are linked by almost 100 miles of biking/walking trails that weave through town. Lincoln is also the home of the University of Nebraska.

Finding the Capitol was easy -- go downtown and look around. At 400 feet tall, it's the second tallest Capitol in the USA just behind the similarly designed Louisiana Capitol (430 feet). Both of these are non-traditional in that they are not "domed" Capitols but high-rise towers.

Designed by Bertram Goodhue this building is the third Nebraska State Capitol, all of them built on the same site. The first two suffered from poor construction and building materials. The current building was constructed between 1922 and 1932 in four phases based on the availability of money since the State constitution mandates a balanced budget. (Pay-as-you-go... How's that for a financial concept??!!) 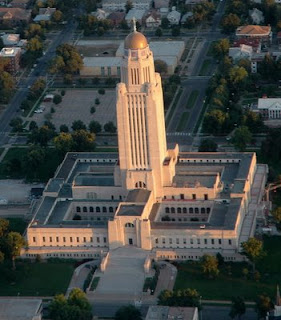 From the air, it's easier to see the "cross within a square" design that makes up the lowest four floors. The first phase of construction was to build the north, east, and south sides of the outer square.around the existing but crumbling second Capitol. The second phase razed the old Capitol and finished the north, east, and south arms of the central cross. In the third phase, the tower was built. And the west side was completed in the fourth phase. Overall, it costs $10 million to build.

I read somewhere that this is the "heaviest" Capitol building of any sort in North America. I can't verify this, but if true it's due to the large number of huge limestone blocks that make up the massive structure.

The first word that came to mind when we entered the building was "dark". The interior has a definite "cathedral" or "castle" feel to it. The north entrance is considered the "front door" and the area just inside is the Foyer, with floor medallions and ceiling mosaics representing the past, present, and future activities of all the cultures of Nebraska.

Extending from the Foyer to the Rotunda is a long very ornately decorated area called the Vestibule -- which is very cathedral-like, with massive columns holding up a high arched ceiling. Your eyes are drawn upward to the walls and ceiling which tell the Story of Nebraska. The Rotunda is situated under a domed ceiling 110 feet above the mosaic floor. The tower rises above this ceiling.

Off the Rotunda are two Legislative Chambers, originally the Senate and the House. But in the early 1930's, after growing concern about the inefficiency and cost of having two governmental bodies working on the same issues, a movement to eliminate one of the Legislative bodies was successful and, starting in 1937, the powers of the House were given to the Senate, and the Senate was renamed the "Nebraska Legislature". [Click here] for more information on the Nebraska Unicameral Legislature, the only one of it's kind in the USA.

Much of the originally planned art was never done, the result of a lack of money during the depression years when the building was finished. But in later years more art was added as money was available, some of it more contemporary than originally envisioned. There are some very nice exterior sculpture ornaments carved into the limestone structure too.

A quick elevator ride to the 14th floor (top floor) takes you to the observation deck and Memorial Chamber, under a golden tile domed ceiling, which is dedicated to public service.

The Nebraska State Capitol is an impressive structure and well worth a few hours of time to visit.

After seeing the Capitol we drove around the U of N campus and then met up with Ben & Sarah, my Nephew who's doing grad work here. They took us to a cool place for dinner, Lazlo's Brewery and  Grill, down in the trendy Historic Haymarket area of downtown. After an excellent dinner we dodged a few raindrops to explore other parts of campus and see some of the historic battlefield project he's working on.

Thanks Ben & Sarah for a thoroughly enjoyable night.

We had a great day and left with a very favorable impression of Lincoln.